13 die in an accident on Bibiani-Anhwiaso road - MyJoyOnline.com

13 die in an accident on Bibiani-Anhwiaso road 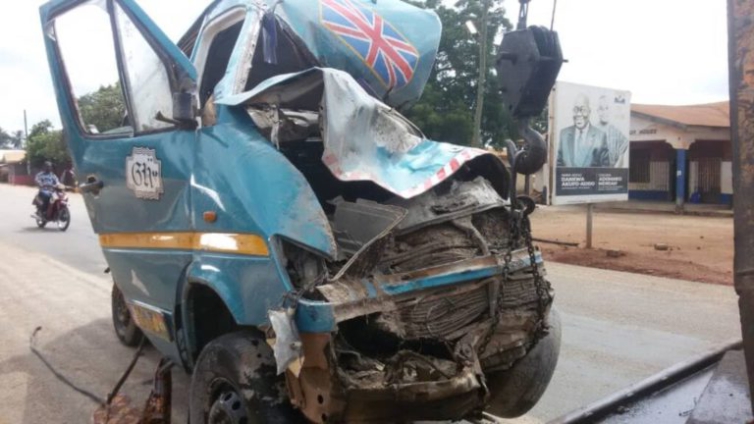 Thirteen people have been confirmed dead after a ghastly accident on the Bibiani to Anhwiaso road in the Bibiani Anhwiaso Bekwai municipality of the Western North Region.

The incident happened on Monday along the Anhwiaso stretch of the road when a Sprinter bus tried to overtake another vehicle.

Giving a situational report for the unfortunate happening, he said: “This morning around 10.30am we had the information that one Sprinter bus from Sefwi – Wiawso to Kumasi and then one Metro Mass bus from Kumasi to Sefwi – Wiawso, were involved in accident when they got to a section of the road around Anhwiaso, the Sprinter bus with registration number AS 1813-19 and a Metro Mass AS 7123-Y.

“According to the source, the Sprinter bus was overtaking a vehicle, so in the process, he had a head-on collision with the Metro Mass bus and the information gathered indicated that 13 people have lost their lives.

These people are made up of eight males and five females but as we speak now, 20 passengers have sustained serious injuries.”

“I was just driving and I met the case. According to the eyewitness, they say the Sprinter driver was overtaking. Where he was overtaking, there was a curve so he met the Metro Mass Transit bus, that caused the accident.

“The moment I reached there they say the passengers on board with the Sprinter, all of them died but later the information was wrong,” he said.

According to him, four of the dead bodies have been conveyed to a private mortuary at Anhwiaso and the remaining eight were sent to Bibiani government hospital.