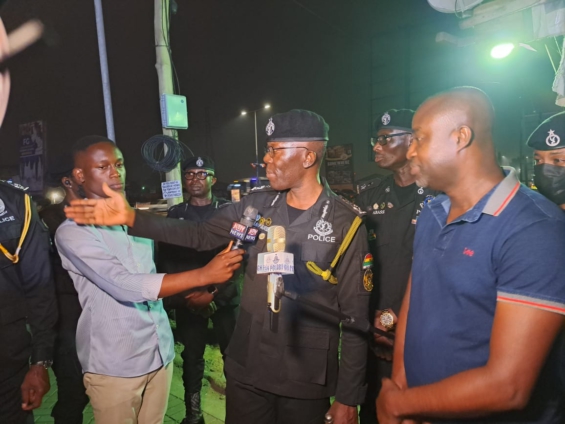 The Inspector General of Police, Dr. George Akuffo Dampare has made a surprise visit to Luv FM and Nhyira FM in Kumasi with promises of a positive outlook for security in the years ahead.

The IGP who was on a working and security monitoring tour of various Police jurisdictions visited the studios of Luv FM and Nhyira FM, flanked by some members of the Police Management Board (POMAB) and officers of the Ashanti Regional Police Command.

His visit was to support and monitor security arrangements and deployments, interact with the media and members of the public, commuters and drivers to boost morale and general security.

The IGP, Dr. George Akuffo Dampare, says his visit is part of his yearly tour to assure the public of the willingness of the Police Service to secure their safety.

“As the year ends, security issues go up a bit so we have to spread ourselves into various regions to help ensure the safety of the general public” he indicated.

She says, the Ghana Police Service is not against divination and prophesy, but will not countenance the communication of prophesy in a manner which violates human rights and the rule of law.

“The Police has no issue with prophecies, our message was clear. Prophesy all you want but do it in the limit of the law” she said.

Even as the Police issue caution on charlatanic prophesies, some so-called men of God say they even have prophecies on the IGP himself.

She told Luv FM’s Erastus Asare Donkor that the Police will monitor and react appropriately if such prophecies violate any law.

Chief Supt. Grace Ansah, cited some achievements made by the Police Service, adding that the IGP and government have put in place measures to ensure sanity in the Service.

“I would not be surprised to see Ghana Police top any ranking considering the measures being put in place by the IGP and government” she said.

DISCLAIMER: The Views, Comments, Opinions, Contributions and Statements made by Readers and Contributors on this platform do not necessarily represent the views or policy of Multimedia Group Limited.
Tags:
fake prophecy
IGP Dr George Akuffo Dampare
Security