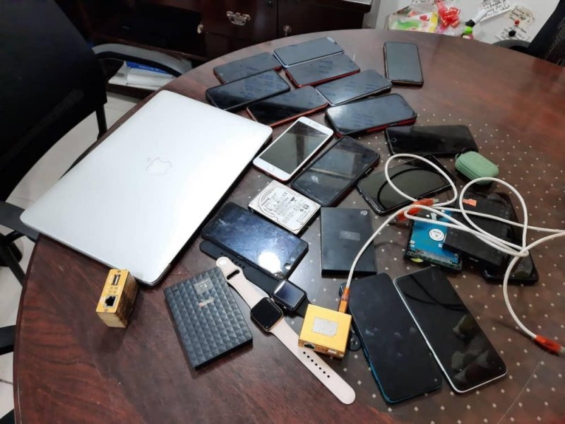 A four-member phone snatching syndicate operating within the Ashiaman and Tema enclave has been arrested by the Tema District Police Command at Ashaiman.

According to a statement signed and issued by the Tema District Police Public Relations Officer, Ms Stella Dede Dzakpasu, the suspects snatched an iPhone 12 Pro from a victim at Adenta who was then seated at the backseat of vehicle and was chatting on the phone, however the tracking device on the phone aided the Police to trace the suspects to their operations centre at Ashaiman.

She said “the suspects were tracked through the phone to their hideout in Misusokope, a rented apartment at Lebanon Zone four, Ashaiman”.

According to the Police the modus operandi of the gang was that Asiamah who is the phone repairer was in charge of unlocking most of the stolen iPhones.

She said the gang normally would send the stolen phones to him to unlock, of which he then buys them and sell.

According to the Police some of the suspects in their preliminary statements admitted their complicity in such criminal activities for some time now and explicitly explained that the usual targets are those unsuspecting victims who fidget with their phones on the streets while not paying proper attention to their immediate surroundings.

According to the Police, the suspects shall be charged before court after investigations.

The Tema District Police Command has, therefore, cautioned mobile phone users to be on their guard while using their phones in public.

The Police also called on persons who have fallen victims to the activities of this phone snatching syndicate to come to the Tema Regional Police Command to identify their phones.