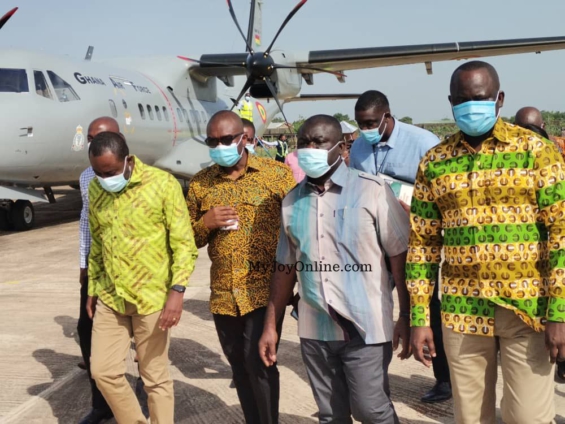 Transport Minister, Kwaku Ofori Asiamah has opined that 70 per cent of road accidents would have been avoided if drivers in the country had exhibited some restraint.

He said safety is a concern to many as hundreds have lost their lives in the last 4 months through road carnage.

Mr Asiamah made this known when he called on the Upper West Regional Minister, Dr Hafiz Bin Salih as part of his tour of the region.

The visit was to acquaint himself with challenges at the airport which have resulted in the halting of commercial flights to Wa.

Africa World Airline resumed commercial flight operation at the airport in October 2019 but suspended in March 2020 following some operational challenges at the airport.

Key among the problems identified was the citing of telecommunication masts on the path of the flight and the absence of aprons at the airport.

The telecommunication companies have, on several occasions, been asked to remove the mast from the flight path but to no avail.

Mr Asiamah stated his office would sit aloof for any flight disaster to occur.

“We are committed to ensuring we provide decent transportation for our people and also provide them with safety. Recently you heard about one thousand people lost their lives through road accidents and we are not going to add air transportation to it if we have the means to stop it,” he explained.

The Regional Minister, Dr Hafiz Bin Salih on his part thanked the minister for the visit pledging to give him the needed support to ensure the successful removal of the masts for the paths of the flight.

DISCLAIMER: The Views, Comments, Opinions, Contributions and Statements made by Readers and Contributors on this platform do not necessarily represent the views or policy of Multimedia Group Limited.
Tags:
Dr Hafiz Bin Salih
Flight Disaster
Kwaku Ofori Asiamah
Road Accident