A woman pope? Meet the feminists trying to save the Catholic Church 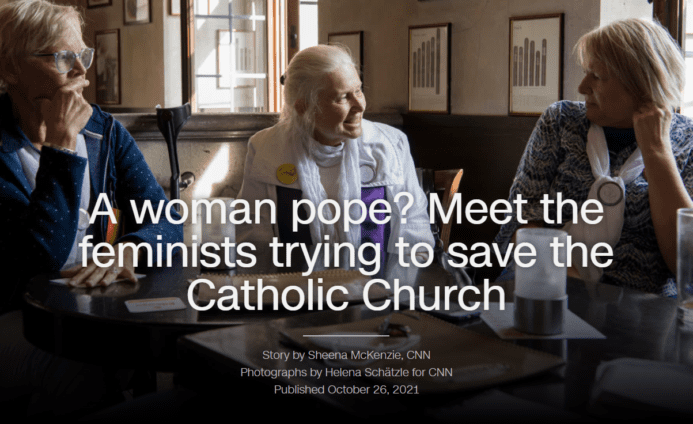 From left, Ulrike Knobbe, Angelika Fromm and Andrea Keber are members of Maria 2.0, a Catholic women’s movement in Germany.

Ulrike Knobbe, a 65-year-old lifelong churchgoer, had never thought of herself as a feminist. “I was even against feminists for a long time,” she says with a wide gap-toothed smile.

And yet here she is: Microphone in hand, wearing a giant billboard emblazoned with demands for gender equality, at a rally of mostly grey-haired women singing along — at full pelt — to protest music.

The protesters hold signs with slogans such as “Same dignities, same rights,” “Women, what are you waiting for?” and “For a church with women.”

Many carry pink cardboard crosses. Almost everyone is wearing a rainbow mask. One woman dressed as a clown sends a stream of giant bubbles into the air.

This demonstration in the German cathedral town of Fulda was organized by Maria 2.0 — a Catholic women’s movement calling for equality and a radical overhaul of the church.

The grassroots movement has more than 65 branches across the country. Its aims include the ordination of women, recognition of LGBTQ relationships, the abolition of compulsory celibacy rules for members of the clergy and proper investigations into allegations of sexual violence.

It was formed by a handful of women in Münster, northern Germany, two years ago in the wake of sexual abuse scandals that rocked the country and eroded a Catholic membership that numbers more than 22 million people.

“People were very angry,” says Angelika Fromm, a 70-year-old Maria 2.0 member, of the scandals. “And a lot of people have left the church because of this.”

She is one of roughly 200 demonstrators who gathered in Fulda last month, zipping around the picturesque town in her mobility scooter handing out whistles and flyers.

It was the third time the group protested here; winding their way around cobblestone streets to the magnificent cathedral where dozens of bishops from across the country had gathered for the German Bishops’ Conference.

Throughout the three-day event, scores of clergymen in distinctive collars pour into the town much as they’ve done for centuries. Even the pedestrian crossings here feature blinking images of bishops.

In the Catholic world, Germany’s national branch is one of the richest and most powerful.

It earns more than €6 billion ($6.96 billion) annually from a “church tax” of its members and donates millions of dollars in aid globally.

But recent scandals — including a 2018 report that found clerics had sexually abused more than 3,600 children between 1946 and 2014 — have accelerated the German church’s decline, divided its leadership and sparked protest movements from lifelong members.

The number of Germans quitting the Catholic Church has been rising for decades, but a record 272,771 left in 2019, the year after the publication of the sexual abuse report.

Germany is not alone, with Catholic Churches worldwide — including in the US, Ireland and Australia — rocked by investigations shedding light on decades-long abuse. In France, a damning report published earlier this month found an estimated 216,000 children were abused by Catholic clergy between 1950 and 2020 — accounting for close to 4% of all sexual violence in the country.

Many people are turning their backs on Catholicism altogether as a result of these disclosures.

But the members of Maria 2.0 are fighting to modernize the church instead, calling for power to be shared equally.

In the Catholic Church, only men can become priests and bishops — and they must remain unmarried and celibate.

Maria 2.0 members see this as an outdated structure in drastic need of a full overhaul.

“There are only men deciding, only men having responsibility, and we want it shared by men and women,” says Knobbe. “The female way of organizing and managing the church would be different to what only men do.”

When asked if a future pope could be a woman, a handful of members nod in agreement: “Yes,” they say. “Why not?”

While it is largely a female movement, Maria 2.0 also has some male backers – many at the Fulda protest were the husbands of female demonstrators.

Each woman has her own reasons for joining the movement. Some, like Fromm, are long-time campaigners for gender equality in the church.

The soft-spoken activist was born in 1951, into a deeply Catholic family in the former communist German Democratic Republic, where religion was repressed.

Her family later fled to the then West Germany. At the age of 20, Fromm married a former priest and had three children. The couple are now divorced.

Fromm says she “nearly lost my faith” in the 1970s after hearing stories of women getting pregnant by priests and being forced to travel abroad for abortions. But she continued studying feminist theology, and in the 1990s co-founded the group Women’s Ordination Worldwide.

Now diagnosed with cancer and barely able to walk, Fromm says: “I don’t think I will live to see change.”

Others, such as Mechthild Exner-Herforth, were inspired to start campaigning later in life.

The 58-year-old co-organizer of the Fulda demonstration had a traditional Catholic upbringing. It was only when she became involved in the church again, after a high-flying career, that she was struck by its deep inequality.

“I was the first woman in a big management team at European level … and really enjoyed this freedom of having kind of equal rights,” Exner-Herforth says. “Then when I got older, I started to engage myself in church and I thought it would be the same,” she adds with a chuckle.

Instead, Exner-Herforth became fed up with women being told they couldn’t hold the same positions as men. “I am absolutely convinced that if the church wants to survive, they have to change,” she says.

Not all Catholic women take that view. The group Maria 1.0 was formed in 2019 as a countermovement to Maria 2.0. It says it aims “to give Catholic doctrine a voice.”

“We believe that Mary does not need an update,” wrote Clara Steinbrecher, the 23-year-old head of Maria 1.0, in an email interview with CNN. “Instead, we stand for the original teachings of the Catholic Church, our mother.”

The group has 3,500 members, based mostly in Germany but also spread across Austria and Switzerland, said Steinbrecher, who is studying math and psychology at a Catholic university.

She said that Maria 2.0’s methods, such as boycotting church services were “bewildering, intrusive and not very Christian,” adding that “most of the initiative’s content is anti-church, since they want to see unchangeable beliefs changed.”

Instead, Steinbrecher said “real reforms emanate from … naming real deficiencies,” such as the “inadequate training of candidates for priesthood.”

On the issue of sexual abuse, Steinbrecher said the Catholic Church “has already done a lot to combat sexual abuse within its ranks,” but added that “there is still work to do and wounds need time to heal.”

Outside there’s another eye-catching sight. A massive sculpture of a priest dozing in a hammock suspended by broken crosses, with the words: “11 years relentlessly coming to terms with cases of abuse.”

Nearby, campaigners from sexual abuse support groups hand out flyers to passers-by and try to get the attention of members of the clergy as they hurry past.

Jens Windel, one of the protesters, told CNN he was abused by a priest over a two year period, beginning when he was 9.

“The trauma doesn’t stop, because there’s no end to the abuse,” says Windel, now 47, squinting into the bright midday sun. “The church has not done enough to bring an end to it.”

Windel founded a support group for victims of abuse in Hildesheim, northern Germany, and has come to the Fulda bishops’ conference every year since 2015.

He is skeptical of Maria 2.0’s rhetoric on sexual abuse, fearing that the women are “misusing it for their purpose.”

But Windel says that while the movement is “not connected to sexual abuse,” he is broadly supportive of its aims, since he “feels that women should be equal with men.”

Other campaign groups see their cause as more closely aligned with Maria 2.0.

Thomas Pöschl is a member of the HuK support group for homosexuals in the church and has come to Fulda to join the Maria 2.0 rally.

The 60-year-old holds a giant rainbow banner alongside his husband Thomas Herold. They were married in what they jokingly call a “forbidden service” in 2003 by a renegade priest in Frankfurt who was supportive of their union.

“The church cannot go on as it is, because people are leaving,” says Pöschl. “They are so far removed from people’s lives, that they are no longer able to tell people what to do.”

A crisis of confidence

Though state and church are officially separated in Germany, in reality things are less clear cut. Religious instruction is part of the state school curriculum and churches hold seats on countless supervisory boards — ranging from public broadcasting to trade unions.

But the church is increasingly regarded as “an authoritarian, outdated institution,” says Detlef Pollack, professor of the sociology of religion at Münster University. “And that’s also a reason why people leave.”

The country’s church tax — amounting to between 8% and 9% of members’ income tax bill — is another deterrent.

In late 2019, German Catholics launched the Synodal Path project in an effort to restore confidence in the church. It involves hundreds of lay members, academics, clergy and bishops debating what remain taboo subjects for many — including lifting celibacy rules and allowing women to play bigger roles in ecclesiastical life.

The project is due to wrap up in 2023, though its outcomes will not change Catholic doctrine.

These debates around modernizing the German church have attracted criticism from the Vatican, however. Some of its most senior officials, including Pope Francis, have expressed concerns that the conference could lead to fragmentation of the wider church.

“The German clerics are definitely more liberal than Catholic priests from Africa or Eastern Europe,” said Pollack, adding that they pose “a challenge to the Vatican.”

Earlier this month, Pope Francis launched a two-year worldwide consultation on the future direction of the church — a move welcomed by reformists and criticized by conservatives who fear it will undermine the church’s structure.

Asked whether enough had been done to combat sexual abuse within the church, Kopp added: “We are working on it. We did much and we have to continue in this.”

Back in Fulda, the demonstrators fold up their banners and pack away their pink cardboard crosses, ready for the next rally. Their battle is far from over.