Activist jailed 2 years for dressing like Thai queen at protest 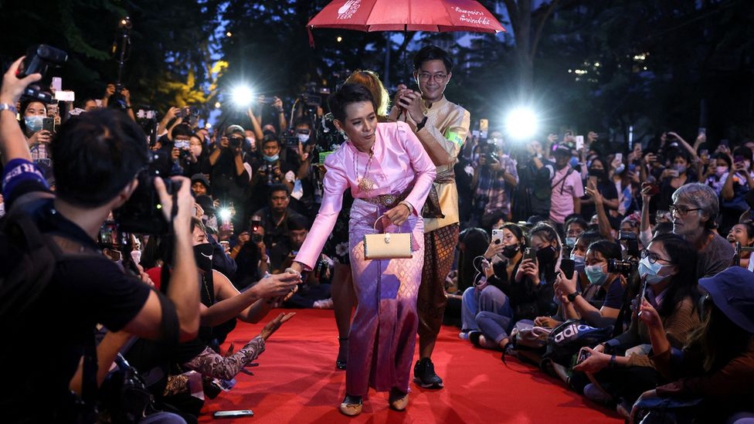 An activist in Thailand has been jailed for two years after a court found she insulted the monarchy by dressing like the Thai queen.

Jatuporn ‘New’ Saeoueng, 25, wore a pink dress at a political demonstration in Bangkok in 2020.

She denied the royal insult charge, saying she had just worn a traditional dress.

But Thailand has notoriously strict laws which effectively ban criticism of the king and other royals.

Since King Maha Vajiralongkorn ascended the throne in 2019, rights groups say authorities have increasingly exercised lèse-majesté laws to quash a protest movement that had demanded reform of the powerful monarchy.

Since November 2020, at least 210 protesters have been charged with lèse-majesté offences, after a three-year period where the law wasn’t enforced at all, Thai legal groups say.

Human rights groups strongly criticised the court’s verdict on Monday. Jaturpon was sentenced to three years but had her term immediately reduced to two years.

She had attended the protest in 2020 as a performer dressed in a formal pink silk dress, where she walked a red carpet accompanied by an attendant who held an umbrella over her head.

The king’s wife, Queen Suthida, often wears formal silk fashions for public events. Thai royals also often have attendants hovering over them with parasols at ceremonies and other events.

Jatuporn said in an interview published before the court ruling: “I have no intention to mock anyone. I dressed for myself on that day, for a version of myself in a Thai tradition dress,” AP reported.

The red carpet protest – one of several that year critical of the monarchy and its influence over the military government – had been staged the same week as a fashion show being held by one of King Vajiralongkorn’s daughters.

“The mock fashion show was a satirical take on the political situation of the country – a peaceful public event akin to a street festival,” said an Amnesty International spokesman.

“Participants should not be punished for participating in a peaceful assembly.”

Last year, a former civil servant who was deemed to have been critical of the royals on social media was sentenced to 43 years in jail.

The palace has not commented on either of these lèse-majesté cases.

The protest movement had initially targeted the military-backed government, led by the ex-junta leader who seized power from a democratically-elected civilian government in a coup in 2014.

However, its criticisms then expanded to include the new King and royal family.

The movement shattered a taboo on criticising the monarchy, though protest leaders were careful to call for changes to the institution, not its abolition.

His famously lavish lifestyle also rankled with ordinary Thais struggling amid the pandemic.

DISCLAIMER: The Views, Comments, Opinions, Contributions and Statements made by Readers and Contributors on this platform do not necessarily represent the views or policy of Multimedia Group Limited.
Tags:
Activists
Jail Sentence
Protest
Thai queen