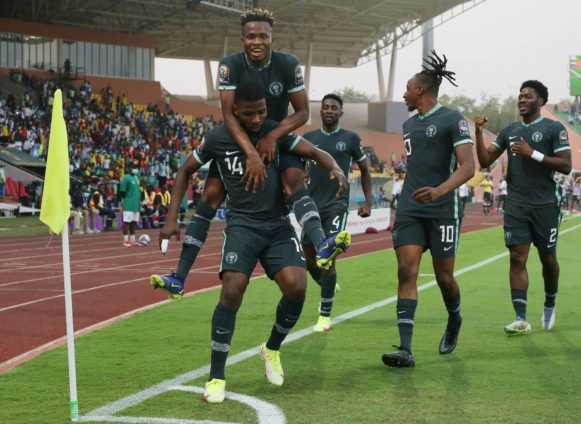 The Africa Cup of Nations continued into its third day on Tuesday, January 11 with three games being played across two groups.

In Group D, Nigeria kicked off their AFCON campaign with a 1-0 win over Egypt at the Roumde Adjia Stadium in the group’s opening game.

The Pharaohs came into the encounter hoping to keep their record of not suffering any defeat in any of their opening game at the continental showpiece.

However, a Kelechi Iheanacho superbly taken strike in the 30th minute of the game was enough to hand the Super Eagles all three points and end Egypt’s record.

Nigeria could have scored more than just a goal but their sloppiness in front of goal let them down on a number of occasions.

Sudan took on Guinea Bissau in the other group game, playing out a goalless stalemate at the end of 90 minutes.

Guinea Bissau had the chance to steal the maximum points in the last 10 minutes of the game but Pele’s penalty was saved by Sudanese shot-stopper Ali Abdullah Abou.

A draw game in the second game of the group means Nigeria now lead Group D, with Egypt being at the bottom.

Earlier in the day, defending champions of the competition, Algeria were treated to a frustrating afternoon at the Stade omnisport de Douala against Sierra Leone in Group E.

The west African side, who are making a return to the tournament after a 26-year absence had goalkeeper Mohamed Kamara to thank after the shot-stopper made some brilliant saves to deny the Dessert Foxes the desired start they were hoping for.

On Wednesday, Tunisia will engage Mali in the first game of the day with Mauritania and Gambia completing the set in Group F.

The Group E game between Equatorial Guinea and Ivory Coast will be the last game of day four.