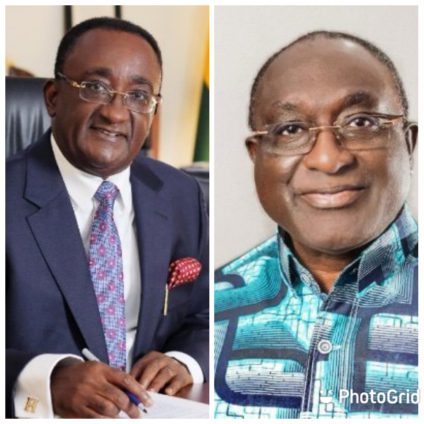 President Akufo-Addo has mentioned in jest, some contenders for the next flagbearship position of the New Patriotic Party (NPP).

The Minister of Trade and Industries, Alan Kwadwo Kyerematen as well as the Minister of Food and Agriculture, Dr Owusu Afriyie Akoto, are reported to be nurturing ambitions of becoming flagbearer of the ruling party.

This comes at a time when the President is barely starting his second tenure in office.

While introducing dignitaries during a tour of the Ashanti Region on Friday October 1, 2021, the President told the Asantehene, Otumfuo Osei Tutu II about two individuals he has heard wish to contend for the seat of President.

“Asantehene, allow me introduce my team members. Here is your grandson, Dr. Afriyie Akoto, my Agric Minister who wants to become the President.”

Laughter spread through the gathering after this statement and the President could not help but join them.

“Nana, this is Alan Kyeremanten, he has been vying for my seat for a very long time, a very workaholic Minister,” he added.

Meanwhile, the NPP has cautioned members against openly declaring such intentions, but there are rumours of some people having the intention to contest.

The party has issued a code of conduct to all aspiring members and warned of punitive measures if any one is found campaigning.

President Akufo-Addo, who has led the party since 2008, continues his tour of the Ashanti Region on Saturday with a visit to Darko Farms and inspection of the Abuakwa-Tanoso Road.