‘Any pastor, church leader who curses a fellow member is fake’ – President of Trinity Theological Seminary 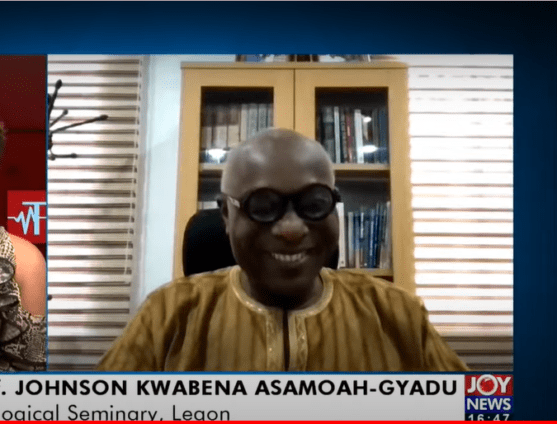 President of Trinity Theological Seminary at Legon, Prof Johnson Kwabena Asamoah-Gyadu, has stated that any pastor or church leader who curses a fellow church member is fake.

Speaking in an interview on JoyNews’ The Pulse, he said it is not stated in any part of the bible that a pastor can curse a fellow member for leaving the place of worship.

“There is nowhere in the bible where we make room for a pastor or a prophet to curse somebody because they left their church.

“In fact, what Jesus even said was that when somebody slaps you on one chick, turn the other of course, he didn’t mean that literally, but that is the extent to which Christians are supposed to go to be tolerant and forgiving,” he told Emefa Apawu.

“So if a pastor curses you, it’s a sign that he is not a good pastor anyway,” he added.

His comment comes after the host queried if it is the case for a prophet’s prophecy of doom to a congregant to come to pass should they leave the place of worship.

Prof Asamoah-Gyadu explained that one of the teachings at the pastoral seminary is to be humane and exercise the spirit of empathy.

Therefore, no decent pastor “will curse anyone simply because they have left their church.”

He noted that when a church leader falls to cursing fellow members for leaving the church, they have become intolerant because “if those people didn’t leave one church, they wouldn’t have landed in your church.”

He backed his assertion with a text from the bible.

“When John the Baptist was baptising in John Chapter 3, scriptures say people left John and went to Jesus, and John’s disciples were complaining to him, the man he baptised has come also baptising and people are going to him, did John curse? He said no. I am just a friend of the bridegroom he is; the bridegroom if people are going home let them go and then he added one of the most powerful biblical texts of leadership, he said he must increase, and I must decrease,” he quoted.

According to him, pastors must promote the glory of God and not curse people.

He reiterated that any pastor that curses a fellow member for leaving a church must be put under a question mark for the pastoral leadership.