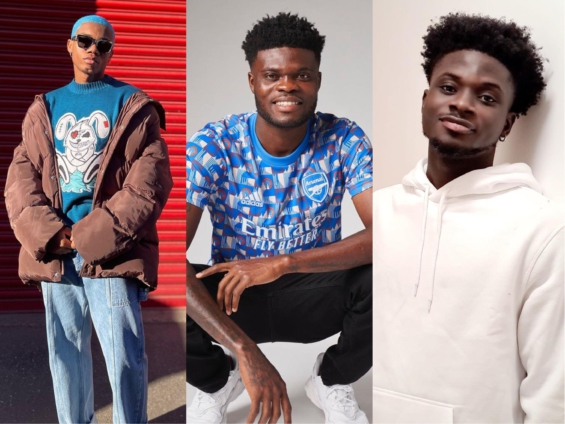 In a video captured by Doreen Avio, a co-host of the event, the Arsenal midfielder was seen sharing some souvenirs from his football club to the young musicians in one of the lobbies of the venue.

The gifts include, customized 2021/2022 Arsenal home kits, champagne from Belair, Rum from Bumbu and other undisclosed items.

Apparently, that was not the only surprise the Lynx Entertainment signees saw on the night of the event – Ghanaian artistes, Sarkodie, Stonebwoy, Kwabena Kwabena, Eugi Official; from Nigeria, Mayorkun and Patoranking also made special appearances on stage in between the headline artistes’ performances, driving the crowd into an absolute frenzy.

KiDi and Kuami Eugene expressed their immense gratitude to Thomas Partey, surprise artistes who flew all the way to the U.K to support them, sponsors, organizers and the esteemed audience.

The 2,800-capacity auditorium was filled to the brim with fans who cheered every single artiste who mounted the stage.

The event was organized by Lynx Entertainment, with partnership from SMADE Events and Akwaaba UK, to mark Ghana’s 65th Independence anniversary.