Be mindful of Haruna Iddrisu, you will need him – UG lecturer tells Mensah-Bonsu 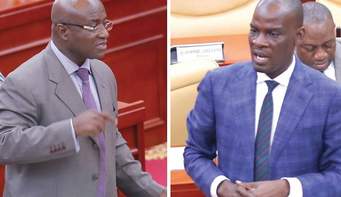 A Political Science lecturer at the University of Ghana has advised the leader of the NPP caucus in Parliament, Osei Kyei Mensah Bonsu to be mindful of his choice of words when dealing with the NDC’s Haruna Iddrisu.

Professor Ransford Gyampo said the structure of the current Parliament gives the National Democratic Congress (NDC) some amount of leverage on the ruling New Patriotic Party and government.

The Political lecturer explained that the reason for his caution is because the NPP will at some point need approval from some NDC MPs in the decision-making process.

This percentage of approval, he explained can only be attained with the help of Haruna Iddrisu.

This he said should be enough reason for Kyei-Mensah-Bonsu who has been proposed as the leader in the next Parliament to tone down his ‘overly partisan comments’ going forward.

“With respect, I think Osei Kyei-Mensah-Bonsu may rather be living in dreamland if he doesn’t learn the rubrics of sounding conciliatory in his utterances and comments in response to “provocations” from Iddrisu Haruna.

“This, coupled with the unprecedented voter attitude of Ghanaians in ensuring that Parliament remains what it is likely to be, in the next few days, should make him approach his overly partisan commentary with some trepidation, going forward,” Professor Ransford Gyampo stated.

He maintained that the controversies surrounding the 8th Parliament and the fact that both NPP and NDC have 137 seats in the legislative house, doesn’t put the NPP in the majority.

Adding that NPP’s plan to rely on the Fomena MP to form the Majority in the next Parliament, holds no volume.

“Osei-Kyei-Mensah must know that per our constitutional arrangement, the Fomena Constituency MP isn’t a member of the NPP, albeit he may choose to vote with them.

“Take a second look at the definition of what a Hung Parliament is. The definition is centred on Political parties and not Independent candidates,” Professor Gyampo said.