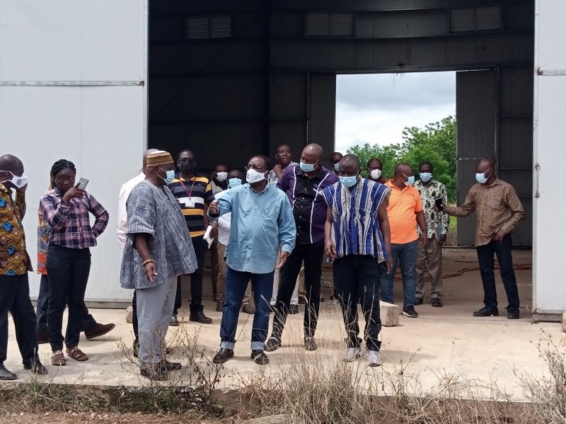 The Minister for Food and Agriculture, Dr. Owusu Afriyie Akoto, has announced government’s intention to make the Bono Region a “model” of commercial rice production in the country.

He said the Ministry with support from the government was importing modern agricultural machinery including tractors, threshers, and combine harvesters that would be supplied to the MoFA offices in the region.

The Sector Minister said this when he addressed Agricultural Extension Officers and input dealers at a meeting in Sunyani.

Accompanied by the key staff of the Ministry, Dr Akoto is embarking on a three-day working visit to the Bono, Bono East, and Ahafo Regions.

The visit would take the Minister and his team to acres of rice farms, poultry farms, tomato, and maize processing factories in the regions.

Dr. Akoto said the Ministry had already engaged 2,700 Agriculture Extension Officers nationwide, saying more of the officers would be engaged by the close of the year.

He said the nation could transform its agriculture sector if it was able to link farmers with the required technology to modernize the sector.

Describing the government’s Planting for Food and Jobs programme as unprecedented in the country, Dr Akoto said the Ministry was committed to strengthening the programme to enable more farmers to benefit.

On cashew production, the Minister said the sector had huge potential to widen the nation’s foreign income earnings and create more jobs for the youth.

He said the government had prioritized and made the sector attractive, hence the establishment of the Tree Crop Development Authority that would regulate the tree crop sector.

DISCLAIMER: The Views, Comments, Opinions, Contributions and Statements made by Readers and Contributors on this platform do not necessarily represent the views or policy of Multimedia Group Limited.
Tags:
Bono East
Bono Region
Dr Owusu Afriyie Akoto
Minister of Food and Agriculture
MoFA
Rice
Rice Production