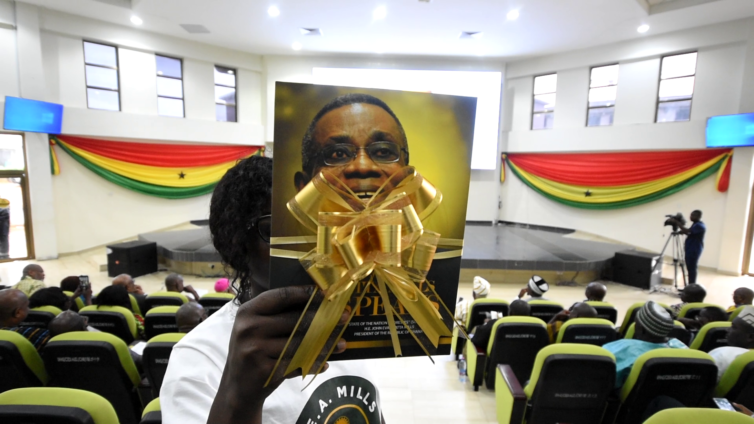 The John Evans Atta Mills Memorial Heritage has launched a book in memory of the late President Prof Atta Mills in the Volta Regional capital of Ho.

The book christened “Atta Mills Speaks” is a compilation of the late President’s four State of the Nation Addresses which contains his visions, proposed programs and projects.

Atta Mills Speaks which is the second publication by the JEA Mills Memorial Heritage was launched at the John Evans Atta Mills Memorial Lecture held at the Cedi Auditorium on the Sokode campus of the University of Health Sciences.

Students, clergy, traditional authorities, politicians, and people from academia among others converged at the auditorium for the Volta and Oti Region edition of the John Evans Atta Mills Memorial Lecture.

The lecture is part of a series of events to commemorate and mark the 10th anniversary of the demise of the late President.

A Member of the Editorial Team of the JEA Mills Memorial Heritage, Dr Eric Osei, said the idea of the book was conceived with the hope that the current or subsequent governments would implement programmes and projects envisioned by the late President for the betterment of Ghana.

He said the speeches and addresses of the late Prof Mills during his tenure as President between 2009 and 2012 would also be compiled and published later in the year.

He highlighted the proposed establishment of a seaport, the western railway and factories to propel the growth industries and promote export to enhance the country’s economy as some of the visions of the late statesman.

“In 2010, President Mills said, ‘Ghana is poised to be a major producer of oil and gas and I have instructed the Energy Ministry in collaboration with the Ministry of Transport to fast track the investment in the necessary infrastructure including a deep seaport with a dedicated oil service facility and the rehabilitation of the western railway corridor.

With the anticipated commercial exploration of crude oil and gas, we are positioning Ghana for a major industrial take-off. We are laying the foundation for (I) an integrated aluminium industry based on bauxite (II) a chemical industry based on salt and natural gas (III) a fertilizer industry to bring impetus to Agro development (VI) salt-based industrial chemical industry for caustic soda and (V) allied consumer products and export based on oil and gas.”

The Vice Chancellor of the University of Health and Allied Sciences, Prof. Lydia Aziato acknowledged the leading role of the late President Prof Atta Mills in establishing the University.

She however requested for assistant to further develop the university and listed infrastructure, ICT lab and student accommodation as immediate needs of the University.

The Chief Executive officer of FC Group of Companies, Dr. Mrs. Grace Amet Obeng, shared memories she has of the late Prof Mills.

She entreated Ghanaians to emulate the life of the late President and eschew the love for money.

He also suggested that UHAS should restore the John Evans Atta Mills Memorial Lectures which have been renamed Leadership Lectures.

“Finally I call on the government during this 10th-anniversary celebration of the passing of our visionary leader to rename the University as the John Evans Atta Mills University of Health and Allied Sciences”, he said.

DISCLAIMER: The Views, Comments, Opinions, Contributions and Statements made by Readers and Contributors on this platform do not necessarily represent the views or policy of Multimedia Group Limited.
Tags:
JEA Mills Memorial Heritage
President Atta Mills
Volta Region