A leader of Cameroon’s separatist movement, Sisiku Ayuk Tabe, and nine of his followers have been given life sentences by a military court in the capital, Yaoundé.

They were convicted of rebellion, among other charges.

Their lawyers accused the judge of bias and withdrew from the proceedings.

The English-speaking separatists argue they are marginalised by the bureaucracy and school system in the majority French-speaking country.

The defendants had been arrested in Nigeria in January 2018 and deported back to Cameroon.

The court session on the verdicts, which started on Monday, went on until 05:30 (04:30 GMT) local time Tuesday morning, reports the BBC’s Leocadio Bongben.

By that time the defence lawyers had already withdrawn from the proceedings but continued to stay in the court as spectators.

Defence barrister Joseph Fru said there were irregularities in the proceedings, including the judge’s biases, but the military court rejected his evidence.

The long list of charges included rebellion, complicity in terrorism, financing terrorism, revolution, insurrection, hostility against the state, propagation of fake news and lack of identification.

Among the 10 who were convicted was Sisiku Ayuk Tabe, the leader of the so-called Governing Council of Ambazonia – the name separatists have given to Cameroon’s Anglophone North-West and South-West regions.

Cameroon’s English-speakers say they have been marginalised for decades by the central government and the French-speaking majority.

The current crisis started in 2016 when lawyers and teachers went on strike over the use of French in courts and schools.

Why does Cameroon have both English and French-speakers? 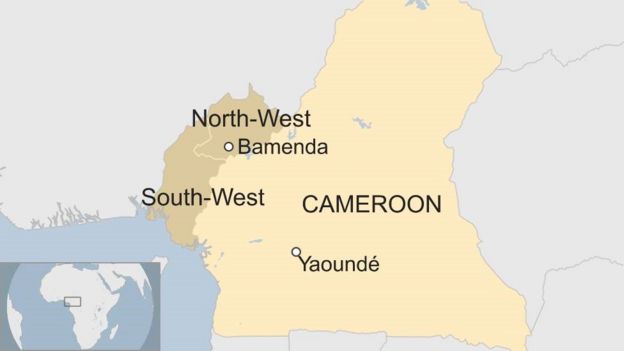 English-speaking Cameroon are marked in the darker colour