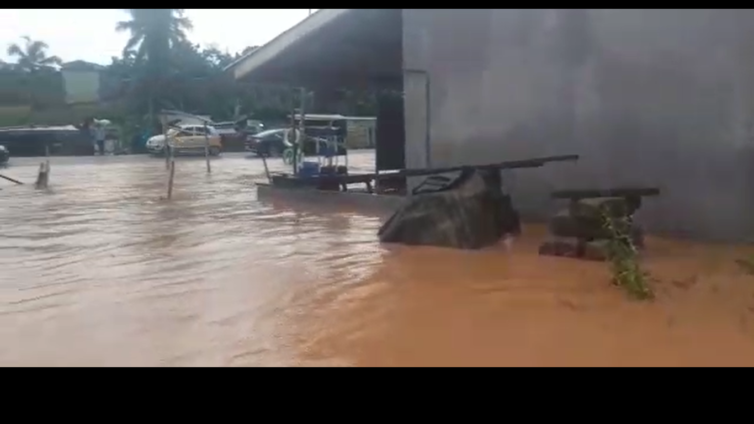 Some major towns in the Central Region have been flooded following Wednesday’s downpour.

Cape Coast, Moree, and some towns in the  Abura-Asebu-Kwamankese district were all affected.

Flood water could be seen rushing into the shops and rooms of many residents in the area.

In a video sighted by Myjoyonline.com, a hairdresser is seen helplessly standing at the entrance of her shop while the flood water causes havoc.

Speaking to AdomNews, a resident called on government to pay close attention to the drainage system in their area.

“We don’t have enough gutters and the ones we have are choked, so government should heed our call and address this issue for us,” he appealed.

Last Sunday, the Works and Housing Minister, Francis Asenso-Boakye acknowledged that perennial flood has now transcended the capital, Accra to various urban and rural areas in the country.

Noting that the phenomenon is not peculiar to Ghana, he cited Germany, France, Britain, and China, among others, adding that, “these incidents point to the increasing role of climate change.”

He, however, noted that government will not shirk its responsibilities to revamp the drainage systems within the country to avert future occurrences.

“Government’s commitment to improving our settlements’ resilience to flooding has been unwavering,” he said on Sunday.

Perennial flooding has been a major challenge the country has battled for decades.

In May this year, parts of Accra recorded two flooding incidents in just four days.

So far, inadequate drainage systems, as well as plastics in gutters, have been highlighted as major contributory factors to the disaster.

Meanwhile, government says it has constructed more drainage systems than any other administration in the history of the country.

“Over the past four years, investment in flood control measures under the 2018 and 2020 National Control Programmes has been the highest commitment by any government in our history. Committing approximately GHS 450 million.

“To date, 2018/2020 National Flood Control Programme has completed the construction of some 35km of drains, while over 1000km drains have been excavated, rechanneled and maintained across the country all in a bid to reduce the devastating occurrence of flooding,” he said.