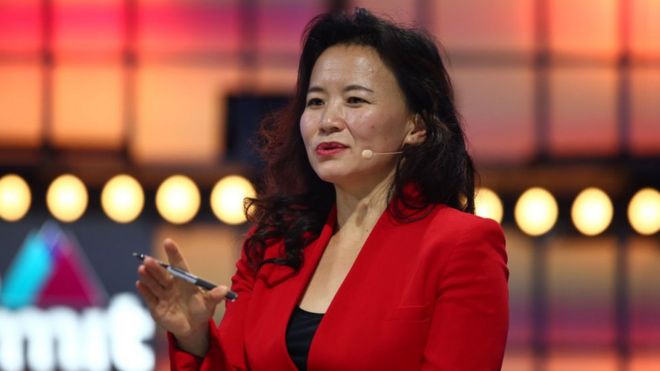 It is unclear what "criminal activity" Cheng Lei has allegedly committed

An Australian journalist detained in China for weeks is being held on national security grounds, China has said.

She has been detained since 14 August.

The announcement comes after the last two journalists working for Australian media in China flew home to Sydney after a five-day diplomatic stand-off.

Chinese authorities questioned both men before their departure. The ABC reported Birtles was “not asked about his reporting or conduct in China” but instead about Ms Cheng.

Relations between Australia and China have deteriorated in recent years.

There had been allegations of Chinese interference in Australian society in the past, but ties worsened after Canberra backed an international inquiry into the origins of the coronavirus pandemic.

The Foreign Correspondents’ Club of China said on Monday a record 17 foreign journalists were expelled from the country in the first half of 2020.

What happened to Cheng Lei?

An Australian citizen based in Beijing, Ms Cheng is a high-profile, respected business journalist for English-language channel CGTN.

In August she suddenly disappeared from television and cut off contact with friends and relatives. China eventually announced she was being held under “residential surveillance” in an unknown location.

No charges were announced at the time. But now foreign ministry spokesman Zhao Lijian said the government detained her on “national security grounds”, saying authorities had taken “compulsory measures” against her. An investigation is now under way, he added.

The spokesman gave no details about the accusations, and it is unclear what “criminal activity” she is alleged to have committed.

But at the time of her detention some believed her Australian nationality may have been a factor, amid increasingly poor relations between Beijing and Canberra.

What about the other Australian journalists?

Mike Smith and Bill Birtles left China on Monday after being interviewed by Chinese authorities. Both men were questioned about Ms Lei, the AFR reported.

The ABC said that Australian diplomats advised Mr Birtles and ABC management last week that he should leave China. He was then booked on a flight due to leave Beijing last Thursday.

But the situation escalated on Wednesday at midnight when seven Chinese police officers visited the reporter’s apartment as he held farewell drinks with friends, the ABC reported.

The officers told Mr Birtles he could not leave the country and would later be questioned over a “national security case”, the report said.

He immediately contacted Australian consular officials, who collected him and took him to the Australian embassy, where he spent the next four days.

Mr Smith, who is based in Shanghai, also received a visit by police – prompting him to go to the Australian consulate there.

They were allowed to leave the country in exchange for agreeing to be interviewed by police.

Mr Birtles told ABC he was not asked about his reporting or conduct in China, but instead about Ms Cheng.

“I know Cheng Lei, but not especially well and Mike Smith in Shanghai had only met her once in his life,” he said. “We didn’t seem like the two most logical people you would talk to, if you really wanted to talk about her situation.

“It felt like a diplomatic tussle in a broader Australian-China relationship more than anything specific related to that case,” he added.

The AFR’s editors, Michael Stutchbury and Paul Bailey, said they were glad both journalists were safe.

“This incident targeting two journalists, who were going about their normal reporting duties, is both regrettable and disturbing and is not in the interests of a co-operative relationship between Australia and China,” they said in a joint statement.

Why are Australia-China ties strained?

The countries rely heavily on each other for trade, but their relationship has soured in recent years, amid allegations of Chinese interference in Australian society.

Ties have deteriorated further this year after Canberra backed an inquiry into the origins of the coronavirus.

In actions widely viewed as retaliatory, Beijing has since imposed restrictions on Australian exports such as beef, barley and wine. It has also warned Chinese tourists and students about racism in Australia.

In July, Australia warned its citizens they may face “arbitrary detention” in China – a travel warning that remains in place.

Canberra has also expressed concerns about human rights in Xinjiang and Hong Kong, and urged China to release detained Australians such as Yang Hengjun, a democracy activist who has been held for 19 months without trial.