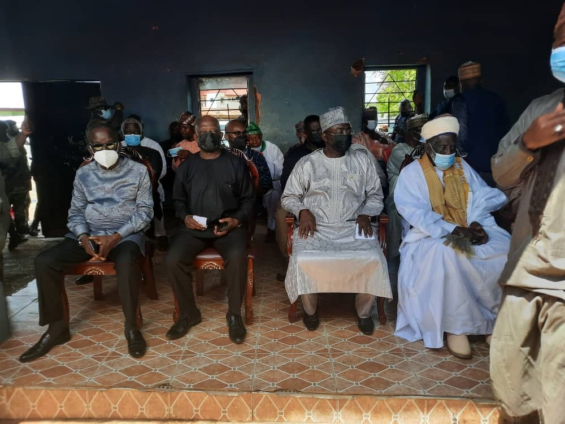 According to him, serving justice in the case is the only way to ensure that sustainable peace is restored to Ejura.

“We want to build a community where we are able to resolve conflicts without violence. We want to build a culture that is anti-violence. A nonviolent mindset at the national level that is prepared to reject any form of violence as a means of obtaining one’s interest and I think that such approach to establish justice is a means by which we can prevent reoccurrence of violence”, Sheikh Aremeyaw Shaibu spoke on behalf of the Chief Imam.

The Chief Imam joined the Vice President, Dr. Mahamudu Bawumiah and other government officials to visit family of victims in the Ejura shooting incident.

The Vice President was accompanied by the Minister for National Security, Albert Kan Dapaah.

The shooting has since attracted national attention with a committee established to investigate the matter in ten days.

Despite assurance from the Interior Ministry that the committee of distinguished individuals will do a good job, residents of Ejura are divided over the committee’s work.

But the Chief Imam is expecting a diligent job.

“Once we are able to get there the Chief Imam will be satisfied, the Chief Imam has a strong inclination to the ethics of love, integrity, justice, honesty, and truth as part of national unity project, in addition to that, Chief Imam is expecting all those affected to remain calm and allow authorities to

The team visited the families of the three who died to commiserate with them.

A donation of GHC 20,000 was made to each of the families with the injured receiving ten thousand cedis.