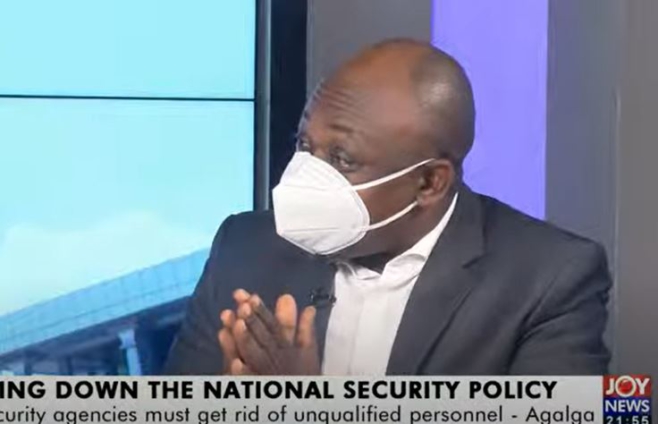 Former Deputy Interior has called for what he described as a purge of the country’s security agencies and a review of the criteria of recruitment.

This follows the launch of the National Security Strategy by the Ministry for National Security on June 7, 2021 with the overarching vision to maintain Ghana as an open, tolerant, socially cohesive, peace-loving, people-centred, secure, united and prosperous constitutional democracy that upholds the rule of law.

Mr James Agalga, speaking on Joy News’ PM: Express, June 8 said all unqualified personnel who have managed to infiltrate the ranks of the agencies must be swept out.

Admittedly, the MP for Builsa North Constituency, indicated that the purging of the security agencies will be a herculean task, however, it is what’s best for the country.

“We need to purge the security agencies of all the people who were unqualified but somehow managed to infiltrate the ranks of the agencies.

“If we take say the police alone, so many people have been recruited into the police without prior advertisements. So the question to ask is what eligibility criteria was used? And I have been fighting these battle for quite some time now that look, at least advertise. Let people put in an application.

“Let them go through some basic examination and then and then if they are adjudged to be fit to join the police service, you put them in there,” he stated.

The former Interior Minister recommended that a reorientation programme for personnel who have already been recruited into the security services as simply removing them from their post might exacerbate the current security situation.

“But now we are talking about the clearance of a backlog with respect to recruitment. Evans, now they’ve already made their way into the Police the other security agencies, do we dislodge them? If we do that in itself will become another threat.”

He, however, mentioned that a motion has been put before Parliament, and when passed, will enable the security agencies to be purged of all unqualified personnel who have been recruited.

But, he added, “The motion itself has already being politicized. Some have filed countermotions. They are saying that what should be the starting point? Where do we start from? If you ask me, my candid view is that we need to make a fresh beginning and to retrain all the unqualified,” he told Evans Mensah.