Dead In Our Tracks: Government cannot tell when trains will work in Accra, Tema and Nsawam 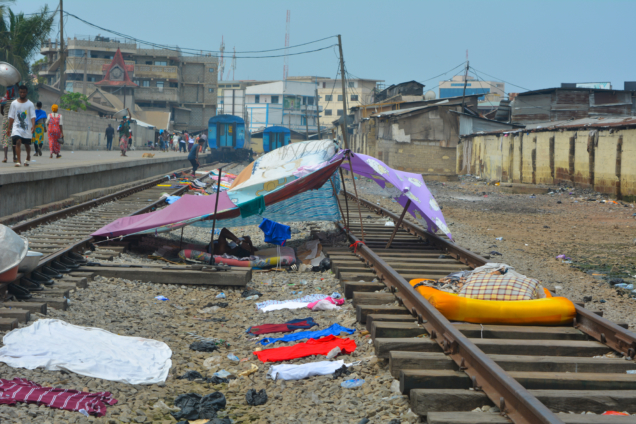 This message from President Akufo-Addo was met with spontaneous cheers from railway workers.

This was the assurance that the railway workers required and the President gave them his word by pointing directly at his heart when he visited them on December 5, 2019.

This is not the first time the President had promised to turn around the railway service’s fortunes and provide Ghana modernized railway service. This pledge was also included in the New Patriotic Party’s manifesto for the 2016 elections.

This promise brought renewed hope to many who witnessed the gradual collapse of the once vibrant Ghana Railways Company.

Mr. Opare Addo is one of those people eager to see the rail service run again. He is a retired Ghana Railway company worker.

Mr. Opare Addo is so attached to his company that even after more than a decade of retirement, he still visits the Nsawam train station to reflect on the company’s state of affairs. “The rail service benefited farmers and traders. But today everything is on the downturn. The train is no longer moving and I am heartbroken”, he wailed.

The Chief Executive Officer of the Ghana Railway Development Authority Yaw Owusu explains that the service from Accra to Nsawam and Accra Tema was suspended for safety reasons.

Like the clock tower at the Accra Railway station, which no longer tells the time, the government of Ghana cannot tell when the trains will run from Accra to Nsawam.

“What I will tell the people who are yearning to use the line is the fact that we want to get it right. We want to minimize any risk of potential derailment or safety” he explained.

When JoyNews pressed him on when the train service would resume, Mr. Owusu stated, “Those lines (Nsawam and Tema) as they exist now are the old narrow gauge. We have to develop a new standard gauge. That may take a bit of a longer time. Please I can’t put any timeline. To be honest with you, I can’t put a timeline. I will be deceiving you if I put any timeline on it. But we are fervently working on it”.

The Nsawam railway station lies in near ruin and abruptly terminates right after the main Nsawam road. Due to many years of neglect of the rail tracks, thieves have stolen the lines and sold them as scrap. The walls were painted about two years ago, but they are almost as dirty as before. The windows are shattered.

The train station has become a gathering place for young people to play games and unwind. Many silos and warehouses that used to store goods have been converted into churches.

Nsawam locals remember the railway service with a fondness for how it sparked a flurry of activity in their local economy. They believe prices of groceries will reduce once trains start transporting foodstuff. 42-year-old Mary, who is a trader is unhappy that she has to spend more money to transport goods to the markets for sale.

She reminisces the good old times when it was cheap to transport goods using trains.

“Now food prices have gone up. It is expensive to buy plantain because the farms are far away in the hinterlands and transporting to market centers by road is expensive”, she said.

Sitsope, a 45-year-old trader in Kotoku, is nostalgic about using trains in Ghana. She recalls transporting her goods to the main Accra Railway station and then hiring truck pushers to transport her goods to the Kantamanto market for sale. She now transports her goods by road, which is more expensive and slower due to traffic congestion. “Have you ever seen a train stuck in traffic?” The train simply moves, and I arrive in Accra in no time. “Right now, I have to board a Nsawam vehicle and then alight at Medie before boarding another vehicle to get to my house”, she grumbled.

The government purchased some stones to help rebuild the lines and stabilize the rail tracks. Unfortunately, the stones or ballast have been abandoned. It is spread out over a long distance. Weeds have taken over the area, and perhaps the rusted coaches abandoned there, paint the perfect picture of the railway service.

A resident of Nsawam John Kuma worried that some criminals have started stealing the stones. “They have abandoned the stones and people are stealing them. If the stones are funded by the taxpayer, then government must start working on the tracks immediately”, he cried out.

There are no words to aptly describe the current state of the Accra Railway station. To say the place is deplorable or to suggest that the place is a pale shadow of its former self is a mild way to put it.

The Diesel Multiple Unit, which connects the coaches, appears to be broken. Squatters have made the area useful, by resting on top of it.

Some people sleep beneath the coaches. Others have built a makeshift tent between two rail lines to sleep in. Rail lines have also been converted into dry lines for secondhand clothing dealers.

Squatters have taken over the Yard Manager’s office. Addicts and the homeless now own the property.

Construction of the company started in 1898 in Sekondi and the rail lines reached Kumasi in 1903. Ghana had rail lines that connected places where the British colonial authorities thought would be most profitable and practical for moving raw materials. From the hinterlands to the Takoradi Harbour, trains brought raw materials including timber, bauxite, manganese, and cocoa.

They also carried people like traders, government employees, students, and other groups who were needed for the advancement of the country.

Many years after Ghana’s independence, the railway infrastructure witnessed little maintenance- to no- maintenance and subsequently ruins. The previous NDC administration revamped the Kojokrom- Sekondi to Takoradi line and it is the only railway route that carries passengers.

The Ghana Railway Company re-launched the Accra to Tema lines in January 2019, but it was canceled again due to the COVID 19 pandemic and observance of social distancing in March 2020. The service, however, remains suspended due to safety on the lines.

Ghana Railways also run a test on the Kojokrom to Tarkwa line but also canceled the service due to a derailing accident. The 97-kilometer railway line from Tema to Mpakadan is arguably the railway sector’s most visible achievement. Mr. Yaw Owusu promised in April 2021 that two Diesel Multiple Units (DMU) would be purchased by November 2021 to transport passengers from Tema to Mpakadan.

That promise has not materialized yet.

The Ghana Railway Development Authority promised that the DMU will “hopefully” be in the country by December 2022 to operationalize the new Tema to Mpakadan standard gauge lines.

Page 24 of the 2016 NPP manifesto spells out the master plan to revive the railway sector. The manifesto reads: … “Completely overhauling the Western and Eastern Lines to facilitate the haulage of bauxite, manganese, cocoa, cement, iron ore and other bulk commodities as well as the transportation of people.

Many Ghanaians are waiting with bated breath for a modernized railway system, as promised by President Akufo Addo.