Digital currency is the way to go in boosting economic growth - Bawumia - MyJoyOnline.com 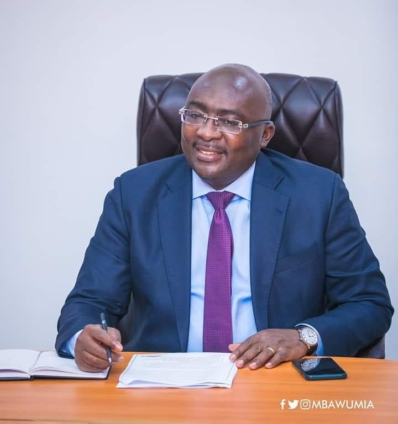 He, therefore, lauded the Bank of Ghana’s decision to pilot digital currency later this year towards its nationwide roll-out in the near future, saying that it would give it the needed credibility and legal backing for usage.

Addressing participants at the opening ceremony of the Fifth Ghana International Trade and Finance Conference (GITFiC) in Accra on Tuesday, Dr Bawumia said, Intra-African trade had created the need to establish a Single Central Payment platform on the African continent where financial system operators could carry out all cross-border payments smoothly.

To that end, the Vice-President believed that the Pan African Payment and Settlement System (PAPSS)- a central payment and collection infrastructure- would allow businesses on the continent to clear and settle transactions in their local currencies without depending on third-party currencies.

He said it would also provide an alternative to the current high-cost and long correspondent banking relationships by facilitating trade and other economic activities across the continent through a single, low-cost, and risk-controlled payment clearing and settlement system.

The event brought together Governors of the Central Banks in Africa, captains of industry, chief executives of financial institutions, and the diplomatic community to share ideas and engage in conversations that would create a conducive environment for boosting economic activities and promote growth.

It was held on the theme: “Facilitating Trade and Trade-Finance in AfCFTA; The Role of the Financial Services Sector”.

Vice-President Bawumia noted that digitisation had become one of the most consequential policies of President Akufo-Addo’s government and pivotal towards increasing economic activities, macroeconomic stability, and growth.

In that vein, a robust and resilient financial system would provide an impetus for productive investments, expand opportunities for jobs and wealth creation.

“As you may recall, in a bid to improve liquidity and strengthen the banking sector, the Bank of Ghana implemented a new prudential regulatory framework.

“Concurrently, digitisation has also become one of the most consequential policies of the Nana Akufo-Addo government. When the scourge of the COVID-19 pandemic hit and forced many economies into partial and total lockdowns, it reinforced the need to pursue digitization,” Dr Bawumia emphasised.

He stated that mobile banking was proving to be a more convenient alternative to traditional banking channels as several routine banking and money transactions were now executed through mobile phones and electronic payment systems.

“Indeed, one has to recognise that for the financial services sector to play its role, there must be financial inclusion.

“The implementation of Mobile Money Interoperability in Ghana has shown that more people can be financially included, and this needs to be rolled out across Africa to ensure the growth of the AfCFTA vision,” he added.

To leverage digital technologies and digitized data, he said, the Central Bank had rolled out a couple of systems through its Ghana Interbank Payment and Settlement Systems (GHIPSS).

They include the e-zwich, Gh-Link, Mobile Money Interoperability, and QR Code and making sure that the underlying payment system running smoothly is the least we should expect of the financial system if we are to realize the vision of continental free trade.

He stressed that since payments were at the heart of the day-to-day operations of a free trade system, negative spillover effects could be serious if something goes wrong.

Therefore in 2019, the Government introduced the Payment Systems and Services Act, 2019 (Act 987), under the supervision of the Bank of Ghana, to consolidate the laws relating to payment systems, payment services, and regulated institutions in the electronic money business.

The advent of this legislation, Dr Bawumia explained, had helped deepen financial intermediation and financial inclusion, not only in Ghana but across the continent.

” I am hopeful that the rollout of the Pan – African system will synchronize successfully with the payment systems architecture developed by Central Banks across Africa and bring about a reduction in cost, time variability, and decreased liquidity requirements of commercial banks and central banks settlements.

“I encourage the Association of Ghana Industries (AGI), a partner entity in this conference, to help its members build a solid and resilient productive capacity to benefit from the AfCFTA implementation.

That, he said, would complement the Government’s effort in providing both the required leadership and investments in implementing the continental trade protocols and related action plans.

He expressed the belief that the conference would deepen the conversations on the need for Africa to design its unique models, which would provide an enabling structural transformation of Africa’s economy and thereby, placing Africa on a sustainable long-term growth path.