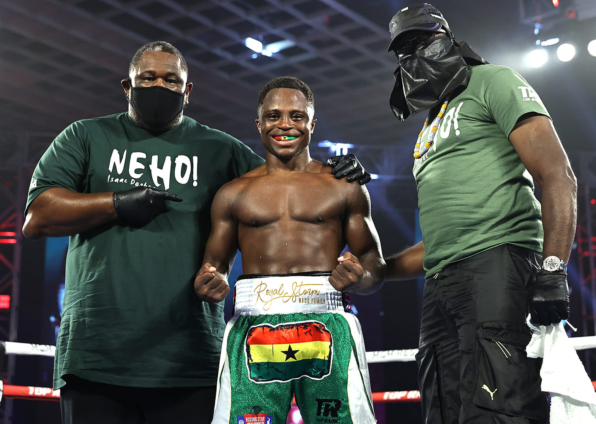 Conlan is said to have ruptured an anterior talofibular ligament injury in the gym ruling him out of the December 5 bout in San Antonio, Joy Sports learns.

Dogboe made a big return to the sport in July this year following a chain of losses to Emmanuel Navarette in the super bantamweight division.

Dogboe who looked better and an attack-oriented style saw of Chris Avalos in the final round of their eight-round featherweight contest.

Conlan, who has gone 14 bouts unscathed with eight knockouts, fell over a bench during some circuit exercises in his gym in South London. The Northern Irish born boxer is recuperating at home and won’t be in action at least for the rest of the year. Conlan could fight on March 17 (St Patrick’s Day) next year – the same date he had his debut pro bout.

It is unclear if Isaac Dogboe will opt for another opponent under the circumstances, as he is ranked 11th with the WBC while Conlan is a place behind him.

“I had agreed to fight Dogboe. He is someone who can bring the best out of me. Hopefully, it can still happen,” an espn.com report quoted the Irish contender as saying.

Dogboe’s camp is yet to respond or give any indications as to whether the former world champion at super bantamweight would move on to another opponent.

The likes of Dominican, Claudio Marrero (25-4), Andoni Gago and WBO European champion, James Dickens (29-3. 11kos) who are all on the WBC featherweight rankings.

Dogboe is a London 2012 Olympian who holds a record of 21 wins two losses from which he has earned the WBO super bantamweight and the WBC Youth silver titles. The 26-year-old currently fights out of Florida.