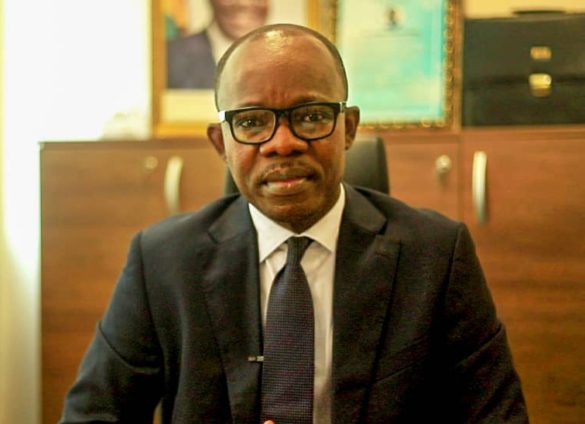 In a statement from the Cyber Security Authority, it said Dr Antwi-Boasiako has led, the revision of Ghana’s National Cybersecurity Policy & Strategy (NCPS) and the development and passage of Ghana’s Cybersecurity Act, 2020 (Act 1038), two enabling interventions which constitute the anchors of Ghana’s cybersecurity development.

During his tenure as Cybersecurity Advisor, Ghana’s cybersecurity has improved on the ITU’s Global Cybersecurity Index from 32.6% in 2017 to 86.69% in 2021, with Ghana becoming the 3rd most ranked country on the African continent and a global ranking of 43rd from the previous 89th position.

He achieved the position through his leadership and a collective efforts of the National Cyber Security Technical Working Group (NCSTWG), which was established in 2017 by the then Minister for Communications as part of the institutionalisation of Ghana’s cybersecurity architecture.

He founded e-Crime Bureau, the first and an award-winning cybersecurity and digital forensics firm to be established and operate in West Africa, in 2011.

He completed his PhD studies at the University of Pretoria in South Africa, introducing the Harmonized Model for Digital Evidence Admissibility Assessment (HM-DEAA) as a ground-breaking contribution to digital forensics standardisation. The HM-DEAA has been adopted by the UNODC as part of its Education for Justice (E4J) Programme.

Dr Antwi-Boasiako has conducted cybersecurity related consulting and assignments for a number of international and local organizations including the United Nations Office on Drugs & Crime (UNODC), United Nations Conference on Trade & Development (UNCTAD), the European Union, Commonwealth Cybercrime Initiative (CCI) of the Commonwealth Secretariat, Global Commission on Internet Governance (GCIG)/Royal Institute of International Affairs (Chatham House) and the Inter-Governmental Action Group against Money Laundering in West Africa (GIABA) among others.

Dr Antwi-Boasiako is an Adjunct Lecturer at the Kwame Nkrumah University of Science and Technology (KNUST) and the Kofi Annan International Peacekeeping Training Centre (KAIPTC). He is also a Faculty Member at the Ghana Police Command and Staff College (GPCSC).

Dr Antwi-Boasiako has received a number of awards and global recognitions. In June 2021, he was recognised as the world’s 20th most Influential Security Executive in the Cybersecurity Category by IFSEC Global, a respected industry body based in the United Kingdom.

Dr Antwi-Boasiako currently serves as the Government of Ghana’s representative on the Independent Advisory Committee (IAC) of the Global Internet Forum to Counter Terrorism (GIFCT). He also serves as a Bureau Member of the Cybercrime Convention Committee (T-CY) and the Government of Ghana’s representative to ECOWAS’ Regional Technical Committee (RTC) on Cybersecurity. Dr Antwi-Boasiako also serves on the Governing Board of the National Information Technology Agency (NITA).

As the Director-General of the newly established Authority, Dr Antwi-Boasiako is expected to lead Ghana’s cybersecurity regulatory efforts under the policy direction of the Ministry of Communications & Digitalisation. Primary focus of the regulatory activities of the Cyber Security Authority includes the protection of Ghana’s critical information infrastructures, cybersecurity incident reporting and information sharing, and regulation of cybersecurity services in the country, among others.