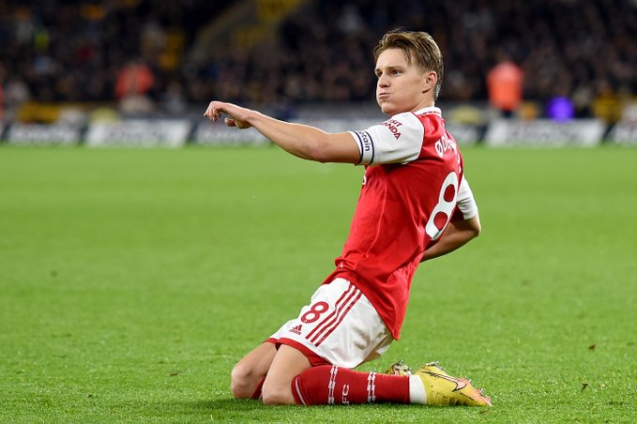 Arsenal manager Mikel Arteta says everyone is shocked at the Gunners surging five points clear at the top of the Premier League but that he is determined his players should enjoy their present lofty status.

Martin Odegaard’s second-half double in their win over Wolves was enough for Arsenal to take maximum advantage of Manchester City’s shock defeat by Brentford and ensure they will be top on Christmas Day for the first time since 2007.

It is a major achievement for a club that has not finished higher than fifth since 2016.

Odegaard turned home Fabio Vieira’s low cross from close range 10 minutes after the restart and then drilled in the rebound after Jose Sa had kept out Gabriel Martinelli’s low effort 15 minutes from time.

It meant there was no slip-up for the Gunners, who watched City’s defeat on the team coach as they travelled to the Midlands and celebrated when Ivan Toney scored in injury time.

“As you can imagine,” said Arteta, when asked about the reaction.

“But that’s the way that you live this league and that’s the beauty. You start to do that on the second game of the season because the competition is so big that you’re always looking at other opponents. It’s something that every team does.”

There was more good news from the Arsenal camp as Arteta revealed Granit Xhaka’s first-half exit was down to a sickness bug that affected the visitors before kick-off, rather than anything that would put the Switzerland player’s World Cup in jeopardy.

The former Spain, Real Madrid and Sevilla boss was introduced 15 minutes before kick-off at Molineux and watched the game from the stands.

He saw a microcosm of Wolves’ season given the hosts battled hard and produced some opportunities despite spending much of the game on the back foot, but were undone by a lack of goal threat as they failed to score for the eighth time in 15 top-flight games.

DISCLAIMER: The Views, Comments, Opinions, Contributions and Statements made by Readers and Contributors on this platform do not necessarily represent the views or policy of Multimedia Group Limited.
Tags:
Arsenal
EPL