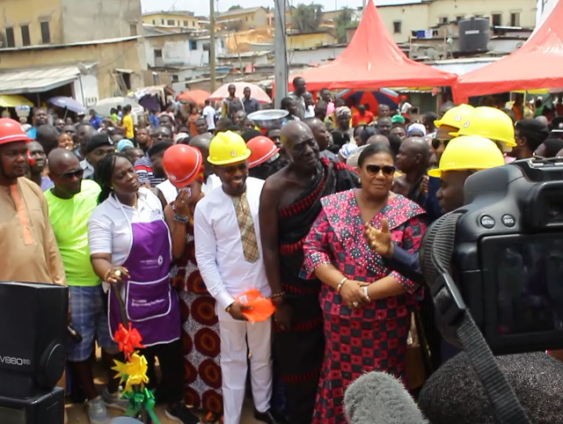 First Lady, Rebecca Akufo-Addo, has cut sod for work to begin on the re-development of the Anaafo market in the Cape Coast.

The Anaafo market, one of the oldest markets in Cape Coast, apart from poor sanitation, had become breeding grounds for mosquitoes and also gets flooded after heavy downpours because of choked drains.

The facility when completed will have a total of 280 stores including stores for fish sellers and butchers, 166 and 186 lockable and storage facilities on the ground floor and 76 stores at the upper floor with halls, conferences rooms and a restaurant.

Scheduled for completion in 12 months, the state-of-the-art facility is expected to significantly ease the hustle and bustle fishmongers and sellers experience at the congested old market built over five decades ago.

First lady Rebecca Akuffo Addo was convinced women would be the greatest beneficiaries of the project and her office would do anything possible to ensure that such projects are done to support women and children.

“I know that women are doing very good works in our homes and communities to support our husbands. And that’s why they need a push to enable them play their role. This market I one of the various interventions government is putting in place to empower women economically,” she assured

But more importantly, she wants her husband, the president to be given another opportunity in the 2020 polls for him to continue the good works the NPP had already started.

“We will all agree that the Nana Akufo-Addo’s administration is living up to its promises. All the promises he made are being fulfilled. And that’s’ why you need to give him 4 more years to finish with what he has started,” she pleaded.

The Metropolitan Chief Executive for the Cape Coast, Ernest Arthur, commended the Coastal Development Authority for the various initiatives they were undertaking to supporting the assembly.

He mentioned the renovation of the Cape Coast Town Hall and the Jubilee Park as some of the projects the Authority had supported.

“It is not only this market, but we’ve also all seen how the town hall and the Victoria Park have been propped up.

“We’ve also seen the sea defence that’s ongoing. The contractor has agreed to the suggestion by the fishermen for a wharf to be created. We shall do more if given the opportunity to serve you once again,” he assured.

He gave an assurance that the contractor had agreed to employ residents in the area during the construction period as part of the local content policy of the government.

Mr Shaib further revealed his outfit had procured 5,000 outboard motors to be distributed to fishermen, of which 1,300 of them was ready for distributing soon.

The First Lady as part of the International women’s day celebration also supported some women in the Central Region with cash, freezers, ovens, gas cookers and other work-related tools to push them in their jobs.