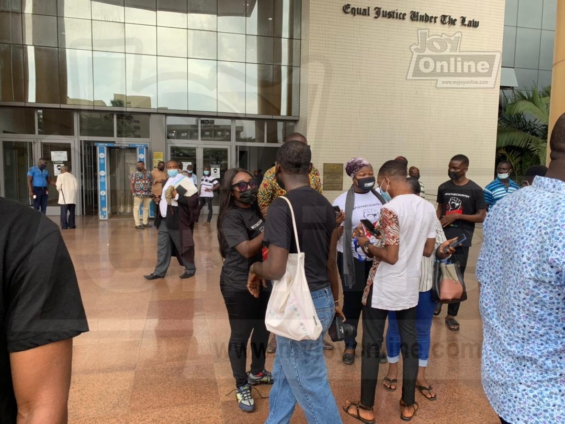 The #FixTheCountry protestors on the premises of the court

The FixTheCountry campaigners are urging an Accra High Court to dismiss a case seeking to restrain them from embarking on a street protest.

The campaigners say only a police officer can make a request under the Public Order Act to restrain protestors from hitting the streets.

In the last few weeks, they have demanded better living conditions through a social media protest, but the decision to take this to the streets has been opposed by the Police Service citing public health concerns.

Attorney General, Godfred Yeboah Dame on Monday morning showed up in court to argue against the street protest, but the campaigners say that is unlawful.

A member of the legal team for the campaigners, Julius Asinyo urged the court to dismiss the case.

He told the court it cannot hear a matter bothering on public order filed in the Republic’s name instead of a police officer.

“The applicant does not have the capacity to bring this application under section 1, subsection 6 of the public order act. Act 491. And as such, the Court is not clothed with jurisdiction to hear or grant the application.

He also raised a second objection regarding the signatory to the court documents.

He stated that they are signed by one Thomas Sarfo who does not indicate whether he is an Attorney at the office of the AG or with the Police Service.

He concluded that the current case is of a civil nature, and the Attorney General’s office has not been named as defendant.

Attorney General Godfred Yeboah Dame described the application as “completely misconceived and a misunderstanding of the fundamental laws regarding this application.”.

He explained that every step within the context of the Public Order Act, Act 491 is a criminal matter. He continued that under Article 88 of the constitution, the Attorney General is responsible for initiating all civil and criminal matters involving the Republic.

“My lady will notice that Section 9 of act 491 gives criminal implications or consequences for failure to notify the police of a special event.

Again, there is also a criminal consequence for failure to inform the police of your unwillingness to comply with the request by the police for you to either postpone or call off your special event.

The application for a restraining order is made on the premise of the same public order act following a person’s indication of his unwillingness to comply with the request by the police. Quite clearly, the application is a criminal one that is why it is even before this court. (Criminal division 1).

For this reason, the application is not brought under CI 47, which regulates civil proceedings but rather brought under act 491, which, as I have indicated, clearly deals with criminal matters.

The fact that criminal offences will be deemed to have been committed and clearly, he will suffer criminal consequences, shows that all aspects of the Public Order Act are criminal and not civil. He is quite clearly, fundamentally wrong in conceiving of the application as a purely civil matter.”

He further rebutted the claim that the Police Service is a separate legal entity. He responded that it is a pure public institution, and his office is empowered by law to act on its behalf.

He further pointed out that documents filed by the Republic clearly has a police officer, one ACP Benjamin Osei Addae of the Accra Region Prosecutions Department swearing the affidavit in support of the motion.

The AG urged the court to disregard the objection, stating that an acceptance will create an absurd situation, where if the injunction is granted against the protest, only the named police officer can enforce it.

He revealed that Thomas Sarfo, who applied for the injunction, is a lawyer in the Police Service, and the AG’s office is pursuing the matter.

The case has been adjourned to Friday June 25 for ruling.