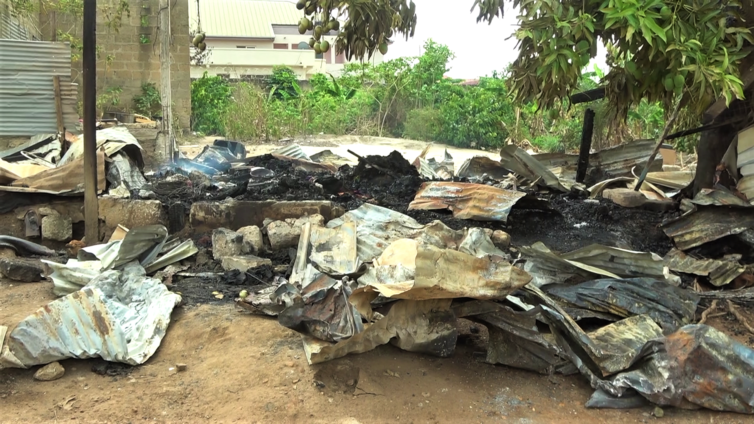 Four persons, including a couple, have been burnt to death in two separate fire incidents in the Ashanti Region.

Several properties have been razed down by the fire which occurred at Gyinyaase and Asante Mampong of the Asokwa and Mampong municipalities respectively.

At Gyinyaase, the deceased, 57-year-old Godfred Afenyo, and his wife 42-year-old Happy Danso, a petty trader, were sleeping in a makeshift wooden structure when it caught fire.

The fire which started about 12 midnight, razed down their home together with some properties.

Their charred body parts have since been conveyed to the morgue by the Police.

Public Relations Officer of the Ashanti Regional Command of Ghana National Fire Service, D.O. III Peter Addai, said preliminary investigations are ongoing to unravel the cause of the fire.

Kingsley Asante, eldest son of the deceased, says he last spoke with his father on Monday, and he was hoping to meet his grandchild.

After trying to reach his father on phone to no avail, he received a call from his friend only to be told his father had died in the fire.

In a similar incident which occurred at Mampong, the granddaughter of the deceased, Abena (not her real name) recounted that she was awoken by the smoke which emanated from their room.

After several hours of calls for help to douse the fire failed, her grandmother sadly died.

D.O III Baffour Gyau of the Ghana Fire Service attributed the incident to the old electrical wiring system in most households in the area.