Frank Davies, Amaliba in near fistfight over absence in court 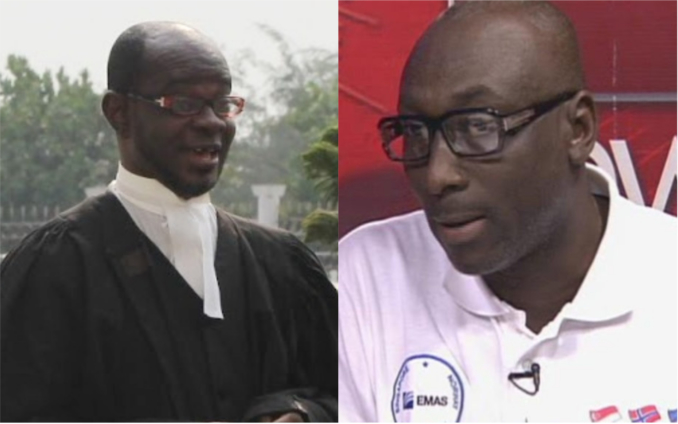 There was near fisticuff at the Cape Coast High court between the lawyers arguing the case of the dual citizenship of the Assin North MP, Joe Gyakye Quayson.

The two lawyers, Frank Davies and Abraham Amaliba had to be whisked away by security guards at the court after the Judge ordered them out of his court.

Mr Davies and Mr Amaliba both got off their seats in courts and advanced towards each other in a disagreement over whether the absence of the lawyer for the Assin North MP constitutes a show of disrespect to the court.

Last week, the case was adjourned for the parties to file their proposed arguments but the lawyer for the MP, Abraham Amaliba was absent when the case was called.

Although Mr Amaliba later sent a letter to the court explaining his absence and appealed for a new date to be fixed, counsel for the petitioner, Frank Davies, insists that Mr Amaliba’s refusal to copy him in that letter constitutes gross disrespect not only to himself but to the court.

The court subsequently took a brief recess after which the two lawyers returned and were made to apologize to each other.

After proceedings resumed, Mr Amaliba filed a motion to amend his answers to the petitioner’s case which was not opposed by Mr Davies. The case has been adjourned to April 12 for Case Management Conference.

In January this year, a petition was filed at the Cape Coast High Court seeking to annul the declaration of Mr James Gyakye Quayson as the Member of Parliament (MP) elect for the Assin North Constituency.

The petition filed by one Michael Ankomah -Nimfa of Assin Bereku, was served with the Electoral Commission (EC) as the second respondent.

However, the petitioner has argued that Mr. Quayson owes allegiance to Canada.

He is alleging that the MP holds dual citizenship contrary to the expressed provision of Article 94 (2) (a) of the 1992 constitution of Ghana, which states, “A person shall not be qualified to be a member of Parliament if he – (a) owes allegiance to a country other than Ghana.”