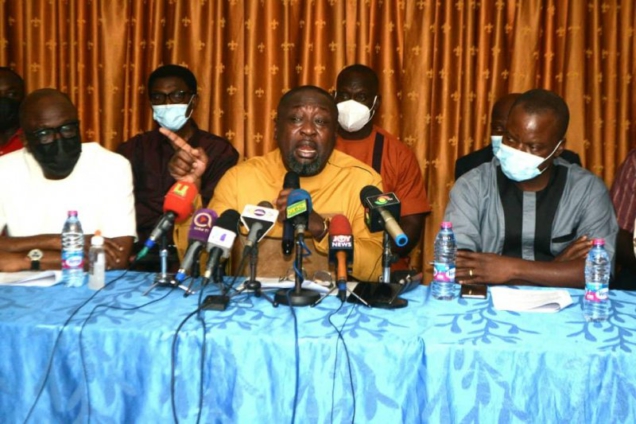 The Ghana Institute of Freight Forwarders (GIFF) has declared its intention to embark on a series of activities against some unexplained shipping line operating costs.

President of GIFF, Mr Edward Akrong, stated at a press conference in Tema that, “while sustaining conversation, the group will picket, demonstrate and embark on other lawful activities in the coming days until equilibrium is achieved”.

Mr Akrong said even though the issue had been raised severally over the years, they were convinced that rent was being sought at their expense as according to the institute, Ghana was worst off when it came to the misalignment of fees structure by the shipping lines.

Elaborating on the issues, he said the shipping lines were still charging administrative fees even though the state had resolved the capacity issues with the Ghana Ports and Harbours Authority (GPHA) and the Meridian and Ports Services (MPS).

He explained that “this fees are charged by the shipping lines ostensibly for local work done to release cargo to the client who has already paid their freight. The fees had legitimacy at the time when state’s capacity was low for which reason they had to augment service delivery through provision of logistics”.

He questioned why shipping line agents begin counting free days for the trader while the box was not at the disposal of the trader’s agent; saying for them to intentionally start the count sometimes when vessels were at anchorage and not fully discharged their cargoes with no recourse to the legal application was unfair.

“It should be noted that the shipping lines do not work on weekends thus truncating the clearance process although our ports are operating 24/7. Section 44 (5) of the Interpretation Act, 2009. ACT 792 settles the confusion on how days should be counted in these circumstances but what do we see?”

Mr Akrong stated that other issues bothered on receipt of containers which suggested that the business expectation of shipping lines was not to receive the containers as they give outrageous conditions and demands when empty containers arrived at the container depot.

He said, “it is interesting to note that all USD indexed invoices issued by Shipping Lines in Ghana come with the Line’s own exchange rates and not that of Bank of Ghana.

“These rates vary from Line to Line and traders only come to terms with this only at the point of issue of invoices”.

He noted that some of the invoices issued were coded and not worded, making it difficult to understand the actual fees being charged and for which reason.

Other issues they raised were container deposits, inappropriate fees borne by importers, additional charges for use of online payments, unauthorized invoices, and unreceipted deductions from deposits.

Others are blacklisting of agents, strange claims on container damage, post-return of containers, and cargo release process that result in massive delays adding to cost.