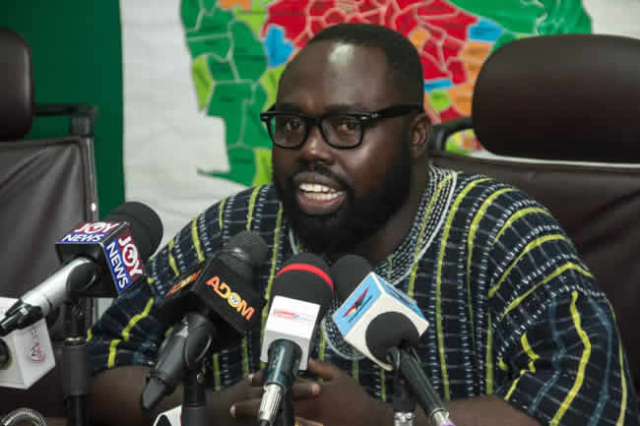 The opposition National Democratic Congress (NDC) has alleged that the ongoing Ghana Card registration is part of a grand scheme by the governing New Patriotic Party (NPP) to rig the 2020 elections.

The opposition party said at a presser Wednesday that its members are being sidelined in the registration process to acquire the national identification card.

Deputy General Secretary of the NDC, Peter Otokunor, who addressed the press conference said a recent arrest of National Identification Authority (NIA) officers caught registering persons at a private residence and pass the approved hours for the exercise is evidence that the process is fraught with fraud and irregularities.

The irregularities, Mr Otokunor said, is proof that “the NPP intends to use the acquisition of the Ghana Card as one of its methods towards manipulating and rigging the 2020 elections.”

He alleged further that in areas such as Akweteyman, Abbosey Okai, Mataheko, where the registration is currently ongoing, NPP officials disguised as NIA personnel deliberately work to frustrate members of the NDC from acquiring the Ghana Card.

“In some cases, applicants are made to fill the form and are asked to come three days later for their biometrics to be taken. Who does this?” he quizzed.

Speaking further on the allegations on PM Express, a current affairs programme on the Joy News channel on MultiTV, Mr Otokunor said the end-game in government’s push for a Ghana Card implementation is for the Electoral Commission (EC) to approve the new IDs as a means to get high numbers of NPP members on the electoral roll.

“What we are dealing with is a grand ploy to increase the numeral strength of a particular political party so that, as we are perceiving and as we have seen and as the EC has indicated –  and from all the indications on how the NPP are very firm on this using voter ID card to register [for the Ghana Card] and all that –  it is going to be obvious that when we are going to compile a new voter register, [the Ghana Card] may become a primary document,” he stated.

However, rebutting the allegations on PM Express, Head of Public Affairs at the NIA, Francis Palmdeti, said the registration process for the national ID does not include obtaining applicants’ political affiliation.

He said the NIA will be shooting itself in the foot if there was a deliberate ploy to sideline anybody or group from acquiring the card.

He explained that because the NIA will be dealing with some key user agencies like the Social Security and National Insurance Trust (SSNIT), it stands to make more revenue if its database of Ghanaian nationals is exhaustive.

“I am wondering how [NIA] officials can think that an individual showing up belongs to a particular party,” he said.

“…from where I sit as an official of the NIA, there is no document I have seen that draws a certain roadmap for a certain political agenda. I have also not had any hearing or I have not sat in any meeting where a grand scheme or plot has been designed.

“I believe that what NIA is doing is a service to Ghana. Ghana s lagging behind when it comes to matters of identification in the subregion. Our neighbours, Togo, Burkina Faso and Cote d’Ivoire are miles ahead of us. They all have ID cards for their nationals. They are able to tell as soon as a foreigner comes into their country,” he said.

The Ghana Card is the national identity card that is issued by the NIA to both resident and non-resident Ghanaian citizens.

It is can also be issued to legally and permanently resident foreign nationals.

The card will serve as proof of identity, citizenship and residence of the holder.

The mass registration and card issuance exercise in the Greater Accra Region from Monday, April 29, 2019, and is expected to end on Saturday, July 6, 2019.

The region has been divided into two zones: Accra West and Accra East, where registration centres have been opened at specific locations.

Get more from the discussion on the Ghana Card registration on PM Express in the video link below.

DISCLAIMER: The Views, Comments, Opinions, Contributions and Statements made by Readers and Contributors on this platform do not necessarily represent the views or policy of Multimedia Group Limited.
Tags:
Election 2020
Ghana Card Registration
NDC