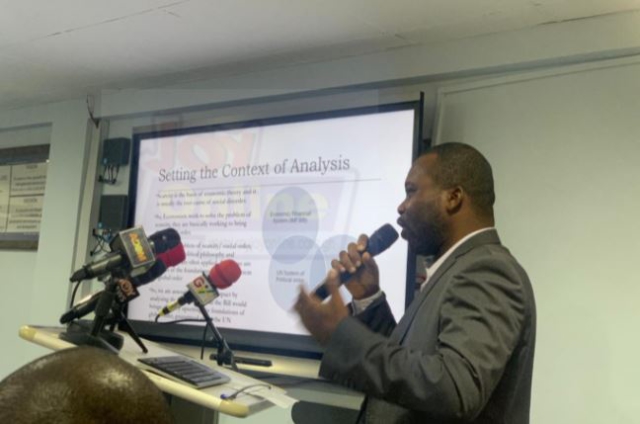 A survey conducted by the Centre for Democratic Development (CDD-Ghana) has found that the passage of the Anti-LGBTQI+ Bill will throw government’s economic agenda out of gear.

The Proper Sexual Rights and Ghanaian Family Values Bill, in its current state, is seeking to criminalise the activities of homosexuals and ban any form of advocacy on it.

But experts are warning and predicting a grimmer outlook for Ghana’s economy should Parliament pass the Bill.

Presenting the findings of the Centre’s study on Tuesday in Accra, Executive Director of ISODEC, Bernard Anaba, hinted that Ghana is likely to face economic and diplomatic pressure if the Bill is passed.

“By this Bill, we have added economic conditionality on ourselves [as a country] when we go out to seek support. Ghana’s budget regularly relies on grants of about 4 to 6 per cent each year from donor partners who are mostly against this Bill as we know.”

“This could result in the delays and reduction in this budgetary support. I remember there was a year when the Finance Minister complained that the budget did not work well because these funds [from donors] were delayed. So now, there is a more reason why it even delays more; you can imagine the economic impact because four to six per cent of your budget is huge.”

Mr Anaba added that “Ghana’s relatively weaker economic position makes it more vulnerable to any rebuke of the EU and other western governments that do not support this bill.”

The Anti-LGBTQ+ Bill, since its introduction, has generated public debate from various stakeholders in the country.

While some members of Parliament and religious bodies have advocated for the passage of the Bill, other civil society groups and academia have opposed it, stressing that it will violate human rights when passed in its current state.

Parliament’s Constitutional and Legal Affairs Committee is set to resume its public hearing of the controversial document for further consideration.

DISCLAIMER: The Views, Comments, Opinions, Contributions and Statements made by Readers and Contributors on this platform do not necessarily represent the views or policy of Multimedia Group Limited.
Tags:
Anti-LGBTQI + Bill
Bernard Anaba
CDD-Ghana
ISODEC