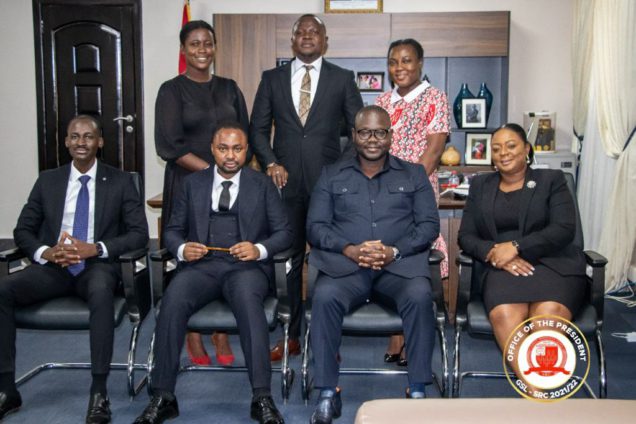 Mr. Asenso- Boakye (second right) in a picture with the SRC Executives. Seated to his right is the SRC President, Wonder Victor Kutor

The Minister for Works and Housing, Francis Asenso-Boakye took some executive members of the Students Representative Council (SRC) of the Ghana School of Law by surprise when he issued an instant cheque to support a scholarship fund that has been instituted by the student body.

The SRC executives, who were thrilled by the gesture had visited him to formally present a letter seeking his assistance towards the fund.

The fund has been set up to help cushion less endowed students to pay their fees.

But the Minister, who immediately signed a cheque for an undisclosed amount after hearing why they were there, said he was a beneficiary of a scholarship.

He said the scholarship enabled him to do his Master’s degree in the United States which is why he sees the need to immediately respond to the call.

For him, poverty should not be a barrier to education, indicating that it takes such Scholarship initiative to get the financially weak individuals to actualize their dreams through getting an education.

“So many years ago, I saw an advert in the then Peoples’ Graphic by Rotary and I applied but I was asking myself how can a village boy like me be picked from the many Ghanaians but thankfully I was picked and went to do my masters”, he recalled.

According to him, the situation where students of the law school struggle to pay school fees is surprising in view of the fact that not too much is needed to complete all the components of the fees.

Mr.Asenso- Boakye who made a number of pledges to the SRC executives, further promised to collaborate with the Ministry of Finance to open up the admissions into the law school by supporting the SRC to put up a complex which among others will provide accommodation to students and beef up the infrastructure deficit on campus.

The Minister who is also the Member of Parliament for Bantamaa in the Ashanti Region, agreed to deliver a lecture on a topic around the new rent control law which is in the offing at a public lecture which has been planned by the SRC in November.

On his part, the President of the Student Representative Council of the Ghana School of Law, Wonder Victor Kutor who led the delegation presented the criteria which will be used to award the scholarship to students.

He said it is going to be a very transparent process with the prospective beneficiaries expected to apply online.

He told the Minister that his constituency has been selected to benefit from an outreach program which will be embarked on by the students during which he will be awarded for his contribution to the SRC.

The Head of Welfare Committee of the SRC, Freda Antwi, on behalf of her colleagues thanked the Minister for being among the first to donate to the scholarship fund.

Earlier, the SRC delegation which included the Organizing Secretary, George Alan Dodoo called on the former Chief Executive Officer for the Tema Oil Refinery. Kwame Awuah Darko at his residence.

The visit had in attendance the Head of Communications Committee, Juliet Butunguh, and the Head of Scholarship and Sponsorship Initiatives, Patrick Danso Okrah.

On the delegation too was the Head of Welfare Committee, Freda Anti and the Executive Assistant to the SRC President, Kathleen Ohemaa Agyei- Larbi.

The former TOR boss who also headed the Bulk Oil Storage and Transportation (BOST) at a point, urged the SRC executives to transform the student body by making it better than where they took it from.

He, further, advised other executive members to solidly support their President, explaining that it is the surest way of achieving the set target as leaders.

He on his part, he also pledged to contribute to the scholarship fund by making his donation available next week.