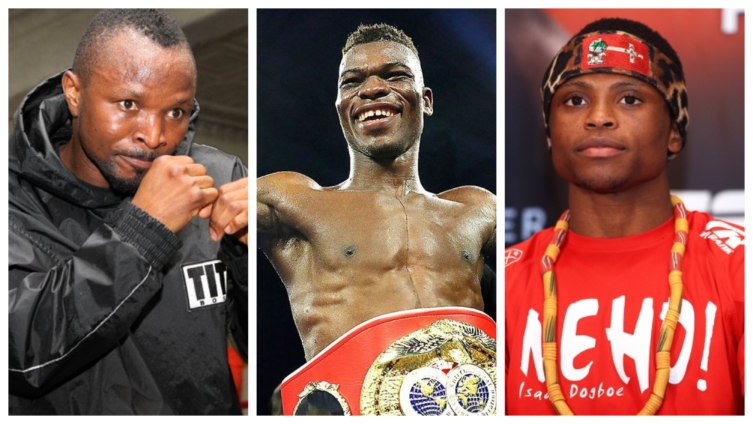 Eight of Ghana’s top boxers could be in title or high profile bouts next year depending on some factors.

This is primarily because they find themselves in the top 15 rankings of the world’s major sanctioning bodies WBC, WBA, IBF and the WBO.

So a lot of tough background work by a boxer’s management team, the right partnerships and alliances, topped up with marquee performances can guarantee these much sought after title bouts.

With less than two months to end the year 2020, we take a close look at Ghana’s performers in the sport and where they stand.

The 26-year-old won on his second stint with the featherweight division over a year away from the ring by seeing off Chris Avalos with an eighth-round knockout in Las Vegas.

The December 5 date is now open however his promoters Top Rank will make a final determination in the coming days. Dogboe has the option for filling the spot with another opponent or waiting till next year to fight.

Commey coincidentally who lost his IBF lightweight title via a second-round KO to current undisputed lightweight champion Teofimo Lopez – the same way he won it against Russian, Isa Chaniev months earlier. The Ghanaian is yet to step in the ring after the loss.

Commey is rated sixth on the WBC rankings, 11the on the IBF and 12th on the WBO log. With these, he has an array of opponents to choose from especially as he looks forward to regaining his status quo soon.

His team at Streetwise Management who are normally very proactive are expected to announce a bout for the Ghanaian soon.

The former IBO champion is ranked 3rd with the WBO, eighth with the WBC and seventh on the IBF log. In his last two bouts, Tagoe annexed two fringe titles – the IBF International and WBO Global lightweight titles which contributed a great deal to push him up the ladder.

Ghana currently has no world champion, and the likes of Tagoe, carry the responsibility of changing the trend.

Tagoe became a world champion for the first time in November 2016, after defeating former champion Mzonke Fana of South Africa to annex the IBO belt at the Bukom Boxing Arena.

He successfully defended it a little over a year later against Argentine Fernando Saucedo after which he vacated the title. Tagoe is currently in the US getting ready for the next major challenge.

While no date has been announced for his next bout he looks the more likely to get a major shot as Teofimo Lopez could opt for him.

King Kong still has a lot of boxing in him and wants to strap a championship belt one more time.

The three-time champion is the number two contender on the WBO ranking and could be two bouts away from getting a shot at the title which John Riel Casimero holds.

The champion coincidentally defeated a Ghanaian, Duke Micah to win it.

The 2012 Olympian is yet to announce his return to the ring after his failed attempt at the world title. He lost via a knockout to John Riel Casimero on September 26.

With his 11th place on the log, Micah would need a minimum of two bouts with any of the top 15 ranked to get another chance.

Ahead of the September 26 date, Micah had won the WBC silver title in his native Ghana in March 2017, on a night when two other compatriots Richard Commey and Frederick Lawson had also won WBC international titles.

He is the 13th boxer on the WBO standings. He made a major recovery after his only career loss to Wasiru Mohammed by winning the WBO Africa super bantamweight title.

Naturally, champions will veer off the track of the likes of Sackey who have good records.

However, Sackey could be at the better end of fate and opportunity and land a big one just like then 13th ranked Joseph Agbeko had an opportunity against them IBF bantamweight champion Luis Alberto Perez in 2007.

He is the number 5 contender with the WBA bantamweight ratings and looks forward to emulating the last Ghanaian to win with the sanctioning body, Ike ‘Bazooka’ Quartey, who won the welterweight belt in 1994.

Plange is one of the best prepared from the amateur ranks having fought around the world and on some big stages including the AIBA World championships. And as the saying goes one has to face the best to be the best.

So Plange has to at least encounter and conquer one or two of the four boxers ahead of him – number one contender Reymart Gaballo, Jason Moloney who is second, third-placed  Raushee Warren and Liborio Solis.

This young boxer who is a stable mate of the Fit Square gym in Accra Ghana holds the WBO global belt at super bantamweight which he won after knocking out Benin’s John Amuzu and is sixth on the WBO’s rankings.

He previously had a stint with the WBO Africa title after defeating his compatriot Isaac Sackey in what was also a grudge bout.

Mohammed has in previous interviews with Joy Sports, expressed the ambitious desire to avenge Emmanuel Navarette’s defeats of Isaac Dogboe.

While it may seem far-fetched due to the Mexican’s move up divisions, anything is possible provided Wasiru also moves go featherweight and wins his bouts against some big names.