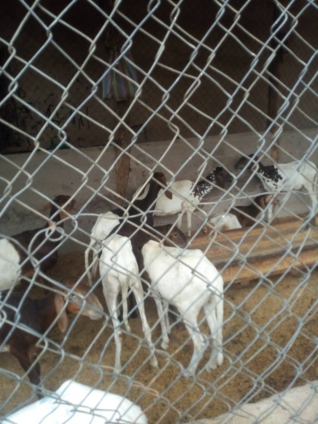 Police in Savelugu have intercepted an Opel Astra with registration number BA 1538-12 loaded with goats suspected to have been stolen.

The suspects were arrested at a snap checkpoint at the Savelugu Airport junction.

Suspects, Haruna Zakaria, 23, who was driving, and his accomplice whose name has been given only as Saadi had loaded 26 goats with their mouths sealed with black sellotape in the car heading for Savelugu.

According to police sources, one of the suspects, Saadi, managed to escape and is being sought after by the police.

Savelugu Municipal Police Commander, DSP Twumasi Ankrah, who confirmed the incident, said the animals are currently with the police adding that1 8 of the animals are still alive while the rest have died due to suffocation.

He said one goat also escaped when they were being offloaded from the vehicle.

DCOP  Twumasi said the owner of the taxi – allegedly the receiver of the animals in Savelugu – is being sought after to assist the police with investigations.

The police appealed to residents around Choggu, where they suspect the animals might have been stolen from, to visit the command for identification and collection.