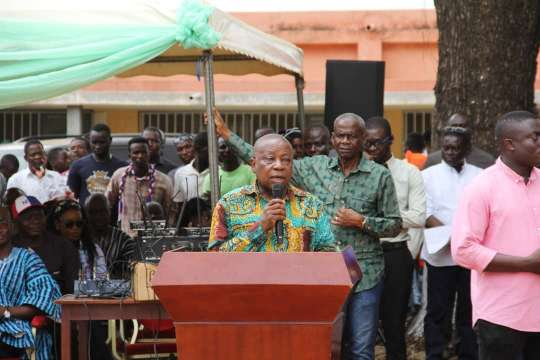 The Binaba Health Centre in the Bawku West District of the Upper East Region, will in 2020, be upgraded to the status of a Poly Clinic, the Minister of Health, Mr Kwaku Agyemang-Manu, has said.

The upgrade would ease pressure on the District hospital located at the district capital, Zebilla, from cases, especially pregnancy-related complications that were referred to the hospital for further management.

The Minister recalled that during his tour of some health facilities in the region early this year to get first-hand information on health facilities and staff in the Region, the health centre was selected for upgrading as part of measures to improve the quality of health care delivery in the area.

Mr Agyemang-Manu said this at a durbar of Chiefs and people of Binaba, organised in honour of President Nana Addo Dankwa Akufo-Addo as part of activities to mark his two-day tour of the Region.

“We picked the Health Centre at Binaba for upgrading. This has actually been scheduled and we are pushing it into our budget. Early next year, we will see some action in that area,” he stated.

He said that the ministry has started working on President Akufo-Addo’s assurance to Ghanaians in his 2016 manifesto, to distribute equitably quality health care in the country.

“At the moment we are still in the process of distributing health care staff to areas that are distressed,” he added.

Mr Agyemang-Manu, who doubles as Member of Parliament for the Dormaa Central Constituency, said enough health professionals would be posted to the facility to boost the staff strength.

“We want to push facilities, push personnel, push equipment closer to people such that wherever you live, no matter how much money you have, you can have access to health care when you fall ill,” he stated.

The Minister said about 275 ambulances would be distributed to all Districts in the country by the close of this year, and the Bawku West District would benefit from it.

He said the Ministry was working assiduously towards quality health care delivery for the people of Binaba and the country at large.