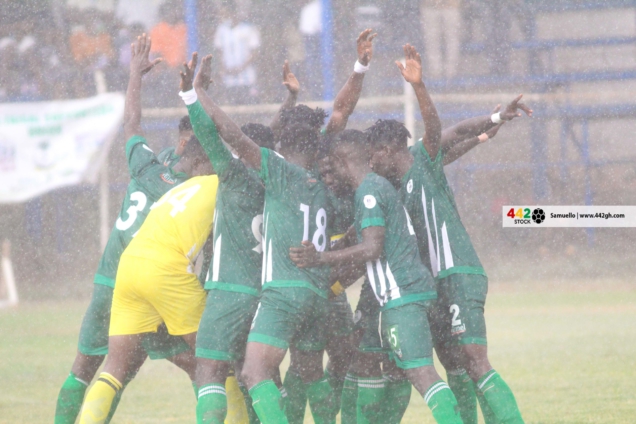 King Faisal and Aduana Stars’ quest to keep the 2021/22 Ghana Premier League season a two-horse race in the first round took a snag on Sunday after both teams lost their games in the 10th round of fixtures.

The Insha Allah boys, who had been on a five-game unbeaten run were undone at the Bechem Park in the 80th minute of the game with former Asante Kotoko forward, Augustine Okrah scoring the only goal of the game to hand Bechem United the maximum three points.

At the Akoon Community Park, Aduana also suffered a last-ditch 1-0 defeat to Medeama Sporting Club. Ahmed Toure scored with just two minutes until the end of the game to hand the Ogya lads their first defeat since matchday two, when they lost to King Faisal.

With one outstanding game still to play, Kotoko went level on points with both Aduana and King Faisal after managing to beat WAFA in their encounter at the Baba Yara Stadium. Richmond Lamptey’s strike was the difference-maker for the Porcupine Warriors, who looked to have regained their momentum following a run of three games without a win before facing Legon Cities last weekend.

Despite being without top-scorer Maxwell Nii Abbey Quaye, Accra Great Olympics saw off competition from Techiman Eleven Wonders as they recorded a 2-0 win at home. James Akaminko and Yussif Razak scored for the Wonder Club.

Stephen Badu’s 43rd-minute strike from the penalty spot was enough to seal the win for Berekum Chelsea against AshantiGold on Boxing Day.

Bibiani Gold Stars were the biggest winners over the weekend as they managed a 3-1 win over 10-men Karela United at the Dun’s Park. Prince Owusu, Charles Kamara Gyamfi, and Nuhu Sule were on the scoresheet for the home team while Umar Bashiru scored Karela’s consolation goal.

Earlier on Christmas Day, Salim Adams scored late in the game to seal a point for Accra Hearts of Oak at the Dawu Park in a 2-2 encounter. Daniel Afriyie Barnie gave the Phobians the lead before Ibrahim Issah and Ishmael Dede found the back of the net for the Believers.

In the other two games, Accra Lions will go head-to-head with Real Tamale United while Elmina Sharks host Legon Cities at the Nduom Stadium on Sunday.