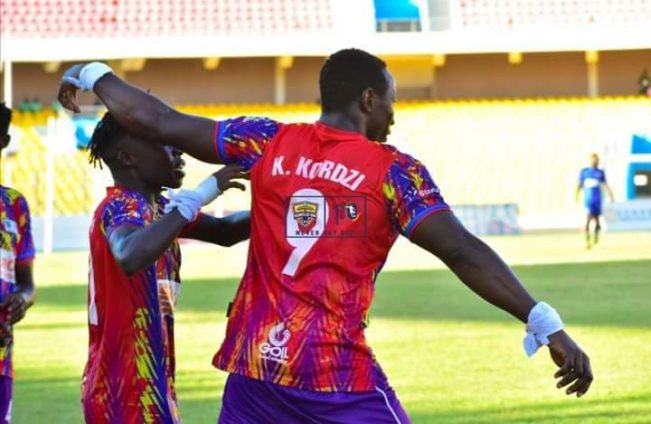 The matchday 13 of the Ghana Premier League saw just two scoreless games as Asante Kotoko kept their place on top of the league table.

The Porcupine Warriors played away from home against Berekum Chelsea at the Golden City Park. Kotoko were fortunate to have walked away with a point after Danlad Ibrahim saved a spot-kick in the 82nd minute.

Rivals, King Faisal suffered a 2-0 home loss to Karela United at the Baba Yara Sports Stadium. Umar Bashiru scored both goals for the Anyinase based side.

A Yahaya Mohammed goal from the penalty spot gave Aduana Stars a point at home against Accra Lions after Daniel Awuni had given the Lions an early lead.

Seth Osei scored twice for AshantiGold as they tun riot over struggling Elmina Sharks on Sunday. The midfielder scored the last two goals of the game after Elijah Addai and Yaw Annor had given the Miners a 2-0 lead in the opening half.

WAFA were also held to a 1-1 stalemate at home by Dreams FC with Medeama and Great Olympics settling for a goalless game.

Real Tamale United eased their way past Bibiani Gold Stars at the Aliu Mahama Stadium as Mustapha Fuseini and Mohammed Sadat were on the scoresheet.

Accra Hearts of Oak were also big winners from the matchday 13 fixtures as they beat Techiman Eleven Wonders with a 4-1 scoreline at the Accra Sports Stadium.

Salim Adams, Daniel Afriyie Barnie and Kofi Kordzi were all on target for the Rainbow club as they bounced back to winning ways.

The last game of the round will see Legon Cities play Bechem United on Monday, January 17.