Group re-appears with mats and pillows to picket Parliament over E-Levy - MyJoyOnline.com 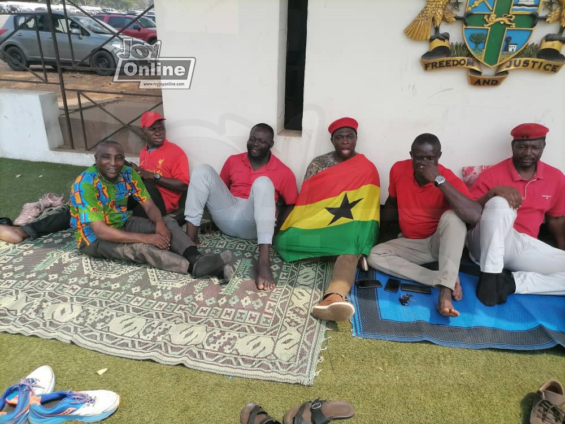 Some aggrieved Ghanaians are not relenting in their efforts to reject the controversial Electronic Transaction Levy (E-Levy).

Members of the ‘Justice 4 Ghana’ movement showed up in front of Parliament on Tuesday to remind legislators of their agenda.

On that day, the group was not allowed entry by some police personnel stationed at the entrance.

They, therefore, resorted to picketing to ensure that the 1.75% proposal does not see the light of day.

Though the bill’s re-consideration has been rescheduled for next week, the group insists it is not ready to be taken by surprise.

This morning, scores of them were seen sitting on mats with pillows and in red attires in protest. Some of them were also clad in national colours.

“Yesterday, we picked signals that today they were going to smuggle it in. And so we are here. We don’t want to be taken by surprise,” convenor for the group, Bernard Mornah, told JoyNews’ Kwesi Parker-Wilson.

Mr Mornah further added that “the chameleon nature of Akufo-Addo and his government can lead them to change their minds.”

The group says it is ready to keep the pressure on the MPs to kick out the E-levy in its entirety.

The Electronic Transactions Levy has been the bone of contention since government presented its 2022 Budget statement to the House last year.

According to Finance Minister, Ken Ofori-Atta, the move will increase the country’s tax-to-GDP from 13% to a targeted 16% or more.