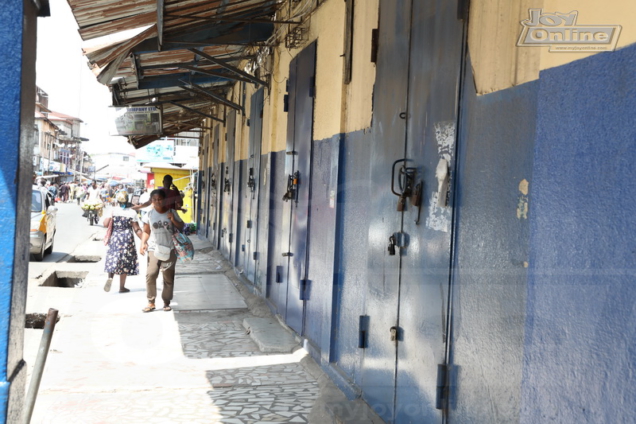 Members of the Ghana Union of Traders Associations (GUTA) in Accra have today closed down their shops in a nationwide protest.

According to the aggrieved traders, their decision to halt commercial activities is based on the exorbitant tax rates and the continuous depreciation of the local currency against the US dollar.

This, the traders say, is adversely affecting their businesses and depleting their capital and profit margins.

A visit by JoyNews’ Bernice Abu-Baidoo Lansah to the Central Business District on Tuesday morning confirmed that some of the traders have already closed their shops.

They had red scarves on their locks indicating their displeasure about the prevailing economic crisis.

The traders noted that if the situation remains the same, they will be forced to run out of business, therefore, the need to protest to draw the attention of government to their plight.

“As retailers, when we come for supplies, we the women don’t get any profits. All the profits have been swallowed by the increments. Some of us are also operating on loans with very high interests rate and therefore we are really not making any profits.

Everything looks distorted in Ghana. The current regime promised to make things better, but now we the women in particular are really suffering”, one of the traders lamented.

The action by the traders in Accra follows an earlier closure by their counterparts in Kumasi, who also closed their shops over similar concerns.

Commenting on the earlier action in Kumasi, the President of the Association, Dr Joseph Obeng expressed his reservations about the prevailing tax regime in the country, and how the situation is bringing businesses to their knees.

The ongoing protest comes at a time when there is public outcry about the state of affairs in the country, and the failure of government to address the growing economic decline.

The current economic decline is reflected in the depreciation of the Cedi as well as government’s fiscal deficits and the nation’s ballooning debt stock.

These circumstances have heightened calls for the Finance Minister, Ken Ofori Atta to be sacked.

But in a recent interview on Monday, the President said there is no basis to sack the Yale-trained Minister.

Meanwhile, government is still in talks with the International Monetary Fund (IMF) to find appropriate solutions to address the economic difficulties in the country.

DISCLAIMER: The Views, Comments, Opinions, Contributions and Statements made by Readers and Contributors on this platform do not necessarily represent the views or policy of Multimedia Group Limited.
Tags:
Cedi Depreciation
Economy
Ghana Union of Traders Association (GUTA)
High taxes
IMF
Inflation
Protest