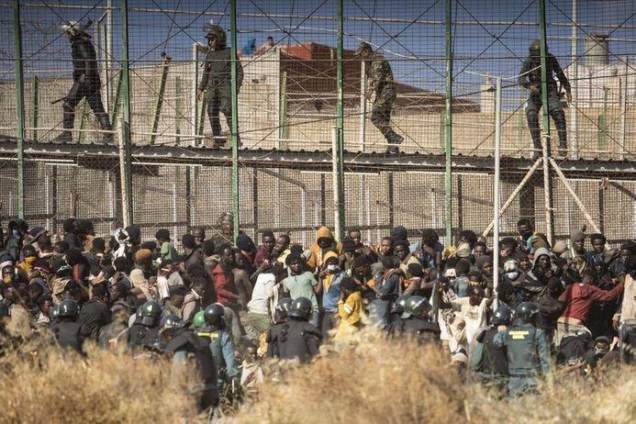 Nador city in northern Morocco was a theatre of a tragic incident on Friday, June 24, 2022 when 2000 illegal migrants staged an assault and attempted to climb the iron fence separating Nador and Melilla, a statement from the Moroccan government has revealed.

This assault, carried out by organised international mafia networks that engage in human trafficking by bringing in migrants from outside Morocco; was extremely dangerous and violent.

It was not oriented towards the fence, but towards the post called Bario-chino reserved for the passage of residents from and towards Mellilia before its closure in 2020 following Covid-19. This post has four narrow corridors, and the massive influx of the crowd into these tiny corridors caused a great jostling and stampede. Parts of the iron fence collapsed under the weight of the numerous migrants trying to climb it.

The tragic incidents resulted in 23 deaths among migrants and 76 injured, 18 of whom are still hospitalized. 140 police agents were injured.

The extreme violence of the assailants armed with batons, machetes, stones and knives and the assault strategy that ensued denote a high sense of organization, a planned progression and a hierarchical structure of seasoned and trained leaders, with the profiles of experienced militiamen in conflict zones as the majority of them hailed from Darfur, Chad and Yemen.

Throughout this sad incident, the Moroccan police demonstrated a high sense of mastery and professionalism and no live ammunitions were used.

The attackers infiltrated through the border with Algeria, taking advantage of this country’s deliberate laxity in controlling its borders with Morocco.

It is worth mentioning that thousands of sub-Saharans live in Morocco, many study there with currently more than 12,000 students, 90% of whom are scholarship holders from the Kingdom, while others work there and are all fully integrated.

Morocco is also the only country in its region to have adopted a National Immigration and Asylum Strategy that has allowed for the regularisation of 50,000 sub-Saharans since 2013 who benefited from a national integration plan allowing them full access to social, educational, medical and economic services, just like nationals.

Unfortunately these efforts are perverted by the criminal actions of trafficking networks, which exploit the vulnerability of victims and push them into dangerous and deadly adventures. These networks use strategies of great violence, particularly during planned attacks, with militia-like and ex-military attackers from countries destabilized by war and conflict.

The Moroccan authorities are conducting a merciless fight against these trafficking networks with over 1,300 networks dismantled in the last five years, 256 in 2021 and 100 until May 2022.

The regional environment, the post-Covid context, the war in Ukraine and the looming food crisis exacerbate the migration challenges, which requires concrete actions in terms of active solidarity and plural support. It also calls for full cooperation among African nations through the exchange of information, expertise and cross-training.

Morocco is also ready to cooperate fully with its African friends and brothers through the exchange of expertise and cross-training, he stressed.

The countries of the North should also focus on a more balanced approach that should not be mainly security-driven, but rather based on structural solutions for the sustainable development of the countries of origin and on fostering legal mobility between the two shores