In every 20 seconds, a fire outbreak is recorded in Ghana - Research - MyJoyOnline.com

In every 20 seconds, a fire outbreak is recorded in Ghana – Research 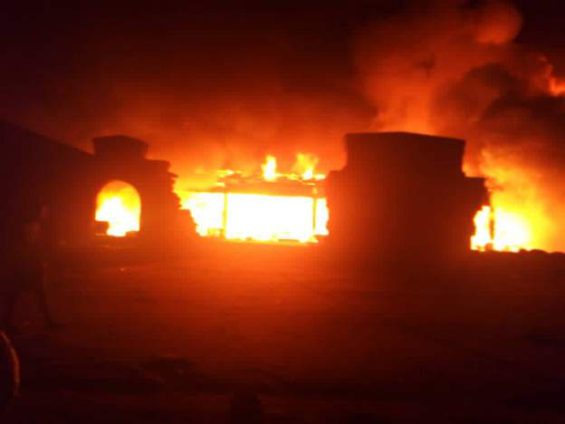 Available research indicates that there is an incidence of a fire outbreak in the country within every 20 seconds.

This, according to the Lead Researcher, Dr. Ishmeal Norman, is due to the fact that most Ghanaians are reluctant to comply with standard fire safety precautions.

“We noticed that Ghanaians don’t care about fire safety and emergencies. They basically leave their trust in God so even though the rules are very clear, they don’t abide by them,” he said on the Super Morning Show on Tuesday, January 25, 2022.

“The [fire incidents] are not the fault of government, it’s not the fault of the Fire Service but it’s got to do with the attitudes of Ghanaians because they hold the view that God loves Ghana so much that He will always protect them,” he added.

He bemoaned the fact that there is adequate legislation to ensure maximum fire safety at home, offices, and everywhere. However, negligence and the failure of individuals to comply with outlined fire precautionary measures have been the cause of most fires.

He cited for instance that “the Factories, Offices and Shops Act requires individuals to take precaution against fire,” but this is hardly adhered to.

Director of Public Affairs for the Ghana National Service, ACFO Timothy Osafo-Affum who was also on the show confirmed this and indicated that often, some of the fires are preventable, however, negligence on the part of individuals cause the infernos.

“A lot of these fires are preventable but continue to occur year after year, leading to loss of lives and property. We go on fire safety education and you don’t have people to attend to you. You go to institutions and they only bring in the security personnel for training,” ACFO Osafo Affum lamented.

Dr. Norman stated that, “the CEOs of companies and government institutions will never come to safety drills but they are the ones that are incapable of doing anything to safe anyone during a firebreak.”

He also recalled that recently a family died in a fire outbreak because their windows were shut and said this situation could have been averted if the public was properly sensitized on fire safety and would adhere to the laid down fire precautionary measures.

“What we can do to avert some of these instances is to educate the public,” he said.

On his part, ACFO Osafo-Affum stated that “until we change our attitude we are going to experience such things.”