Journalist of the year; the journey so far - MyJoyOnline.com

Journalist of the year; the journey so far 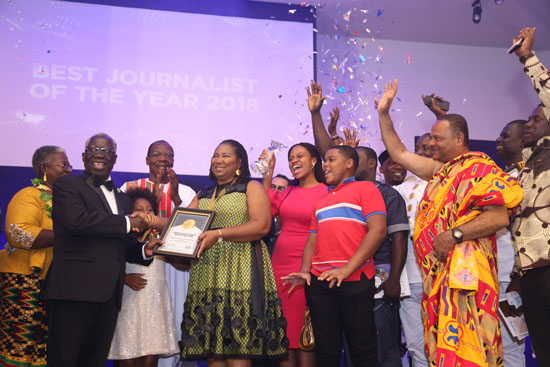 The two events, which took place at the plush Kempiski Gold Coast Hotel, was well organised and attended.

The ambiance, splendid attires and great speakers in addition to the great people I met from the inky fraternity, some of whom I hadn’t seen in a long while over good food, drinks and music by the Police Band and Naa Amanua, made the feeling great.

The occasion was attended by the Vice-President, the senior minister, heads of corporate institutions, traditional leaders, past GJA presidents and friends of the
GJA.

The consensus was that journalism had paid its dues and contributed to shaping our democracy.

They also called for more from journalists.

To say I have been overwhelmed by the recognition is an understatement.

The journey has been windy and less rewarding but at long last, the ultimate recognition has come.

Surrounded by family and friends, I was on cloud nine, to say the least, and that is why I can only thank God and the GJA for the award.

But permit me also, even in my ecstatic mood, to share a few thoughts on our beloved profession.

Seventy years in the life of any institution is sufficient time to take stock and refocus.

While congratulating the GJA on its numerous achievements, I should like to point out a few areas that could be improved upon.

One of them is that as agenda setters, we seem to be overly engrossed in politics to the neglect of equally important social issues, hence my call for journalists to look beyond politics.

I also think that more often than not, the ethics of our profession are thrown to the dogs, leading to unnecessary tension in our society.

We seem to be sacrificing accuracy for speed and most of our reportage lack balance.

As soon as we get one side of the story, we rush to publish. This situation seems to have been made worse by social media to the extent that sometimes we pick stories from social media for publication without verification and this is so unethical.

In this regard, some known and respected media houses have erred.

Another issue of concern is our lack of sensitivity to the vulnerable which causes us to shove a microphone to the mouth of say a widow who has just been told of the demise of her husband through a gruesome accident as she wails, looking for sound bites and show the dismembered bodies of accident victims glaringly in the media.

What we aim to achieve by such exposure is very unclear.

We also fail to protect children, who are vulnerable, for instance, victims of defilement and those needing medical support, showing their faces on our screens and in print, forgetting that such has a far-reaching effect on their future.

To address these concerns, the GJA has a critical role to play by way of training and retraining of its members.

I concede that not all practitioners belong to our association but let us train our own and maybe who knows, their good training could have a ripple effect on the others.

There must be a clear difference between a GJA member and say a comedian hosting a programme.

In the long term, the GJA must redouble its efforts to weed out the chaff so that there is no ambiguity as to who answers to the call of a journalist in this country.

The potpourri situation we find ourselves in now is not helping.

My journey in journalism started about 27 years ago and there have been ups and downs.

I have been lucky to have been mentored and supported by several senior colleagues, my peers, and even juniors.

Any attempt to mention names will be a Herculean task, but I just want to say: “a big thank you,” to all those who touched and contributed in shaping me to become the best journalist in Ghana today.

This acknowledgment is nowhere an indication that I have achieved it all and would relent in my efforts, on the contrary, it will spur me on to even greater heights.

And to you my readers, I salute you all for your continuous interest in what I do.

I would continue to count on your comments and support because if anything at all, the journey has just begun.