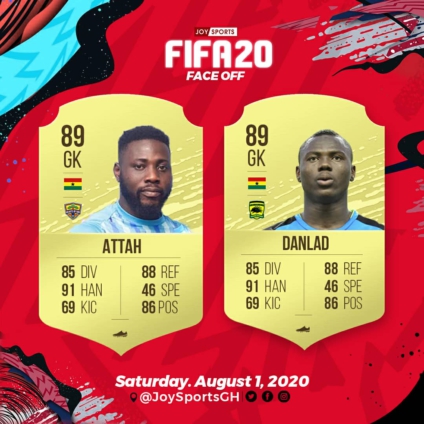 Asante Kotoko goalkeeper Danlad Ibrahim has been backed to overcome his opposite number at Hearts of Oak, Richard Attah, when they clash in settlement FIFA 20 game, powered by the Joy Sports team.

Danland is getting support from his club skipper, Felix Annan, and former Kotoko left-back Eric Donkor. The two egged him on social media following the announcement of the awaited clash.

The action is set for Saturday, August 1, 2020. Many have predicted a tough encounter as the two shot-stoppers have garnered reputation among teammates as being adept on the consoles.

It is the first time the rivalry has been taken off the pitch and onto the e-sports arena. And supporters of two giants are looking forward to it. None would like to be at the losing side with bragging rights at stake.

This initiative by the Joy Sports team is the first of its kind in Ghana as the team continues to lead the way in entertaining sport and associated content.

Outside the country and most recently during the coronavirus lockdown, the Premier League and La Liga organized similar tournaments for star players, which captured global attention.

DISCLAIMER: The Views, Comments, Opinions, Contributions and Statements made by Readers and Contributors on this platform do not necessarily represent the views or policy of Multimedia Group Limited.
Tags:
Asante Kotoko
Danlad Ibrahim
Hearts of Oak
Joy Sports
Richard Attah