King Promise, Cartel Big-J and others perform at Hitz FM Rep Ur Jersey 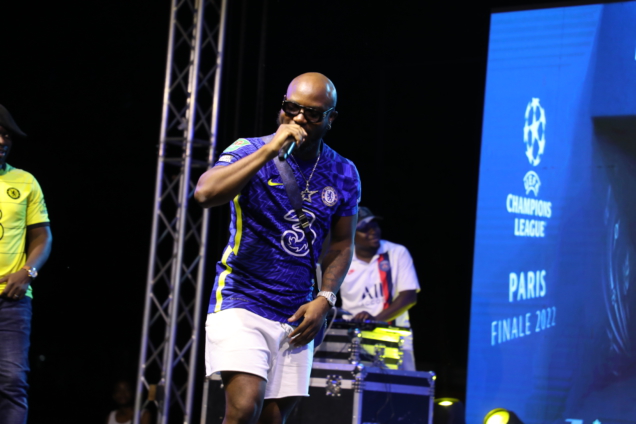 It was a star-studded Saturday at the just-ended Hitz FM ‘Rep Ur Jersey’ at the Aviation Social Center as some of Ghana’s biggest names in the showbiz space trooped in to support the event.

The show would not have been perfect without performances, as King Promise mounted the stage to perform some of his biggest hits as the crowd cheered on.

Cartel Big-J, also known as Praye Tiatia gave an electrifying performance as he performed songs from his former group Praye which put the crowd on their feet.

The event which was heavily promoted and endorsed by some these stars across all Hitz FM platforms saw thousands come from far and near to witness the various activities to take place.

The 5-aside football gala was a major highlight that many anticipated and many wondered who will win the bragging right.

In the end, Dr Pounds and his Dwɛtɛɛ FC team beat Merqury Quaye and his Turn-Up FC on the final to carry the day.

Other activities like the Champions League Quiz, jam sessions from all the DJs at Hitz FM, and many other activities amounted to the electrifying ambiance on Saturday at the Aviation Social Center.