Let’s use Rawlings’ death as an opportunity to heal – Mahama 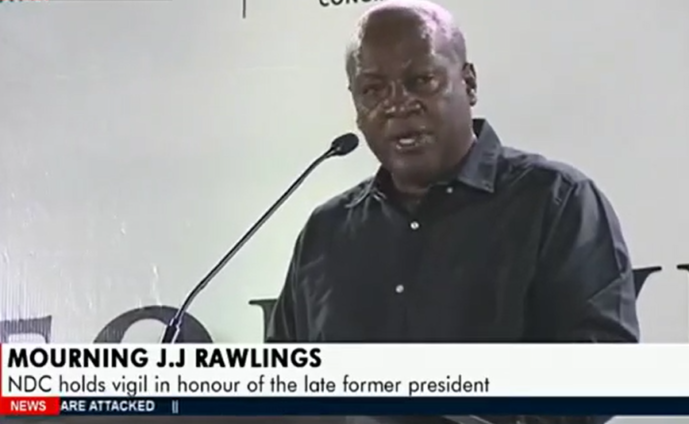 The NDC flagbearer, John Dramani Mahama is urging all who loved and hated the late former President Jerry John Rawlings to use his passing as an opportunity to come together.

Speaking at a vigil held to celebrate the former statesman, John Mahama said he has spotted articles and heard arguments from one party praising the man while others complained that, “he died too peacefully.”

But Mr. Mahama maintains that although the late Jerry John Rawlings was not perfect and had his own shortcomings, Ghanaians should let his death bring the country ‘healing’.

John Mahama said Ghana owes him that especially after his plans for the fourth republic set the country on its current path.

“His impact on the current trajectory of our country has been immense and it is necessary for us to find the right balance to appraise his role as the founder of Ghana’s democracy.

“Having led the country for 19 years, his impact on where the country has come from and where it is headed cannot be understated, let us make his death bring us together.”

John Mahama explained that it is crucial all stakeholders put their differences aside to not only honour the memory of the late Jerry John Rawlings but also give him a befitting burial and funeral.

According to him, the late former President was not only a former head of state but the founder of the NDC, a royal from Anlo, a husband and a father.

John Mahama added that there are a lot of memories he has of the late head of state that will be forever cherished.

He used the platform to urge people who have had encounters with the late former president to document them so the future generation will understand “the man we are mourning today.”