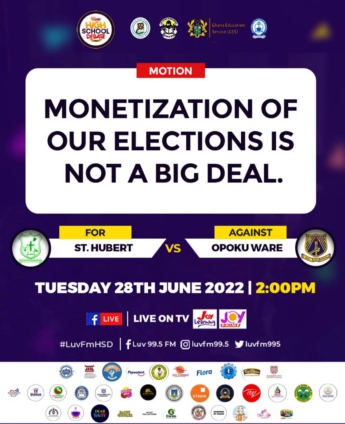 The Luv FM High School Debate will hold its last contest of the one-sixteenth stage today in a competition between St. Hubert SHS and Opoku Ware School.

The debate championship has been a real nip and tuck affair as the schools keep demonstrating their debating prowess against one another.

In this competition, the competitors are debating on the motion, ‘Monetisation of our elections is not a big deal.’

The championship has high schools in the Ashanti Region battling it out with arguments on motions based on issues of national interest.

General Manager of Multimedia Group Kumasi, James Aglah, said it is important students are given the opportunity to express their opinions on national interests.

“For four years, the Multimedia Group has demonstrated faith in its mantra of fearless, independent and credible journalism by giving young voices a platform to contribute to issues of national interest through the Luv FM High school debate series,” he said.

Mr Aglah added that, “As a business, the Multimedia Group sees this as an opportunity to nurture and grow confident speakers and young talents to fill the business space and influence change in the society.”