Management of Nyinahin SHS to set up committee to probe fire incident - MyJoyOnline.com 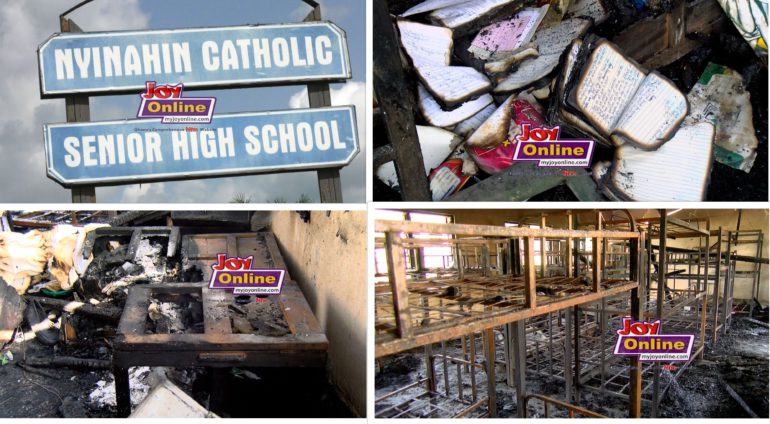 The Nyinahin Catholic Senior High School management is expected to set up a committee to look into last Friday’s fire outbreak, which burnt down parts of the boys’ dormitory.

The fire that burnt down six rooms is suspected of having been ignited by some immediate past school students after their last paper last week.

Reports say the students were angry over claims that management of the school did not allow them to cheat in the just ended WASSCE.

Items, including school uniforms, food boxes and other learning materials, were destroyed.

Chief of Nyinahin, Nana Amampene Twum Boateng II, who visited the scene, says any student found to have played a role in the suspected arson should be made to face the law.

He wants a committee to be set up immediately to investigate the incident.

“It’s so pathetic; why set the school ablaze when you have gone through the walls of the school? It’s unthinkable for somebody who has just passed out of the school to come back to burn the school.”

“We met the District Chief Executive (DCE) and the other stakeholders, and we decided that as early as possible, a committee should be put in place to investigate it; it’s essential,” the Chief said.

“Whenever we get any support, as the chief has promised, we will get it to you. The school is running to town to get a bale of white shirts; all those who are affected, we’d try to give you some.”

“We have some Nyinahin citizens who have been bringing us computers. We are going to call and tell them this is what has happened, and you will receive support,” she announced.

Though no student casualty was recorded during the fire incident, one firefighter was assaulted by unknown persons who fled the scene after firefighting.