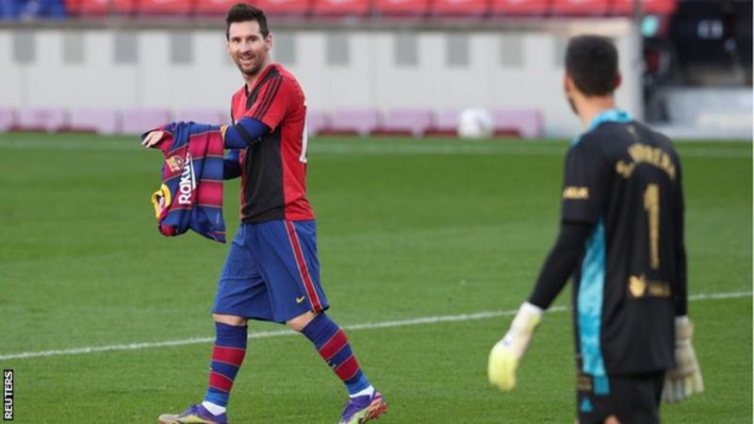 Lionel Messi paid tribute to the late Diego Maradona after scoring in Barcelona’s 4-0 La Liga win over Osasuna on Sunday.

The Argentine also looked to the screen showing Maradona’s picture at the Nou Camp and raised both hands in the air.

Ronald Koeman’s side had managed just one win in their previous six Spanish top-flight games.

Maradona, one of the greatest players of all time, died on Wednesday at the age of 60.

Messi was also on the books of Argentine team Newell’s Old Boys as a youngster before joining Barcelona. Maradona’s playing career included a spell at Barca.

After scoring, Messi lifted his shirt to reveal a red and black replica kit of his hometown club. It was a number 10 shirt, which Maradona wore during his brief spell at the Rosario side in 1993.

Barca had paid tribute before kick-off to Maradona, who played for the Catalan club from 1982 to 1984, hanging a framed, signed shirt of his above the presidential box.

Players held a minute’s silence in front of an old Barcelona shirt bearing the number 10.