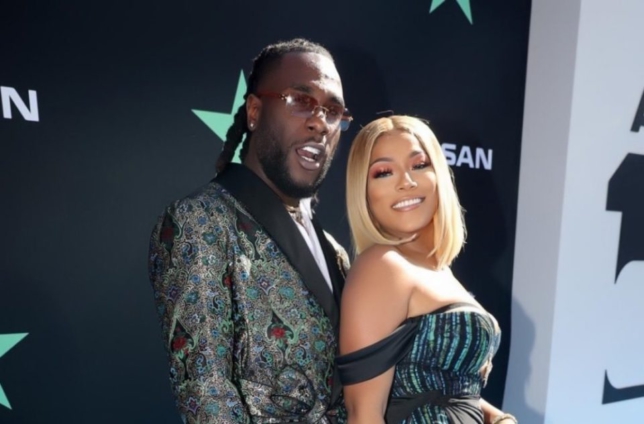 On Friday, May 27, musician Stefflon Don promised to release a song addressing her break up with Burna Boy.

She first shared a snippet of it on her social media handles. The 11 second sound showed she sampled Burna Boy’s new song, Last Last which seemingly talked about their break-up.

At 5:00 pm on the said Friday, she released the song, titled First of All, but the content of it got people on social media confused while others were seemingly angered.

In the ‘song’ she released on her YouTube page, Stefflon Don didn’t sing.

No! She rather told her fans to mind their business.

Laughing on the track, she said, “so I just wanted to gather everybody here today to say it is now time to mind your business! It’s not everything that’s for everybody.”

She stated that people who rush to listen to other people’s business are “nosy.”

“Mind your business that pays you, okay? We’re all good. We’re all fine. We need justice,” she added.

Some people were hurt the musician ‘deceived’ them while others could only laugh at what she did.

Not Steff telling us to mind our business after waiting and anticipating 😭. I knew this rift with Burnaboy was just clout and nothing more. Na my mb wey I waste dey pain me pass 😪 pic.twitter.com/hFc1fTrDuj

Another fan noted that nobody asked for a diss track of any kind or called on Stefflon to address the breakup, she offered it, hence, people’s interest were only sparked when she said she would release a song as a reply to Burna Boy.

But one fan still believes there was and probably still is a diss track in Stefflon Don’s list of unreleased music.

Someone intervened on Burna Boy’s behalf..No way anyone can say Stefflon Don didn’t have a diss track ready.

@stefflondon my notifications for you are still on ….. maybe you’ll drop the correct one soon 🤣 pic.twitter.com/CLp77Oh9XY

Meanwhile, because she sampled Burna Boy’s Last Last, the song was taken off YouTube after Universal Music Group flagged the song for copyright infringement.

This thing is still bursting my head. Is it that this Stefflondon babe has no management team? Who allowed her to do that?

Auntie @stefflondon you have successfully played the whole continent

Someone balance me real quick, That stefflon don release (the supposed diss/reply track) I just heard was actually the full track and not a snippet? 🤣🤣🤣

Yes, she definitely did whatever Burna said she did 🤣🤣🤣

I lowkey feel Stefflon Don really wanted to drop but calls were made. Cos the whole thing was unnecessary if there wasn’t an endgame. She did announcement, did art (that looks like ss from an already shot video btw), she sampled his hook, she put a fire beat on for nothing???

@stefflondon really played a smart one on Nigerians….!! We all thinking, she’ll be dropping a banger to oppress Burna, then boom, she says the unspeakable….!!😂😂😂 The pains goes straight to those who rallied behind her when she dropped the visual…!! Adwuma foon sei…!!😭

After critical investigation bout the entire case, wetting Stefflon don do no correct at all😒

@stefflondon you are clout chaser,you are obviously unreasonable,in your first of all song,you advice people to mind their business but there you are minding @burnaboy ‘s business, sampling his song with out permission 😂

Stefflon Don made a fool of the whole world bruhh 😭💔😂

Stefffffff. The way I was eager to listen to the gist!!!😭😭😭#stefflondon

If you mind your business, you won’t be complaining.

Stefflon don is not serious man. Sis was meant to drop a diss track for Burna Boy but instead said we should mind our business 😩😭.

Why tf did sis choose to miss out on free clout that an entire continent would’ve given her?? She needs to fire her team asap

The stefflon don thing has puzzled me because why should anyone mind their business when no one was interested in the first place? No one has addressed her or questioned her. Confused 😭

@stefflondon what if I don’t want to mind my business 😂💔I anticipated the song for that ni?? pic.twitter.com/q1QlNy8UWi