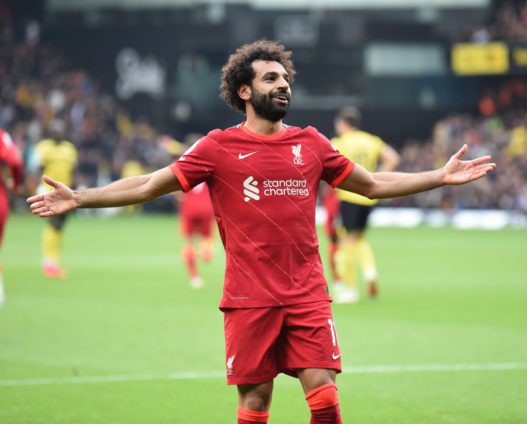 Liverpool boss Jurgen Klopp called Mohamed Salah “the best” player in the world after the Egyptian’s sublime display in the 5-0 win at Watford.

Salah’s glorious pass set up Sadio Mane’s opening goal and he capped a sensational performance with a brilliant individual goal.

“He is top. We all see it. Who is better than him?” Klopp told BT Sport.

“His performance was massive today. The pass for the first goal was great and the second goal was special.”

Salah has now scored in each of his past eight games for the Reds, the longest run of consecutive scoring appearances for the club since Daniel Sturridge, who also scored in eight, in February 2014.

His effort against the Hornets – weaving away from several defenders before curling into the far corner – was of similar quality to his goal in the Reds’ last top-flight match, against Manchester City, which Klopp said would be remembered by supporters in “in 50 or 60 years’ time”.

“He’s the kind of player who can do these things for us,” Klopp added.

“They are different goals. The other one was slightly more dynamic with more space. Neither goal is possible for people with normal feet but it’s possible for him and that makes it really special. You could see the way the team celebrated the goal that everyone knew it was something special.”

Fellow Reds forward Mane, whose goal took his own Premier League tally to 100, added: “Mo is one of the best players in the world. That goal surprises you guys but we see it all the time in training.”

Apart from Luka Modric in 2018, only Lionel Messi or Cristiano Ronaldo have won the Ballon d’Or for the world’s best player since 2008.

However, Klopp believes that the 29-year-old is now eclipsing that vaunted duo.

“We don’t have to talk about what Messi and Ronaldo have done for world football and their dominance. But right now, he [Salah] is the best.

“I see him every day. There are people like [Robert] Lewandowski and Ronaldo and Messi and [Kylian] Mbappe, but at this moment for sure he’s on top of that list.”

Speaking on BBC One, former England defender Martin Keown endorsed Klopp’s view, saying: “The pass from Mo Salah to Sadio Mane was out of this world. We are seeing Salah at Lionel Messi’s level.”

And Micah Richards, another ex-England defender, told BBC Radio 5 Live: At this moment in time Liverpool look like the team to beat. When I watched Salah against Manchester City a couple of weeks ago he was in the form of his life and he can’t be stopped at the moment.

“As a team everything looks like it’s coming together and they really do look strong. Salah is the best forward in European football at the moment in my opinion.”

Beaten Watford boss Claudio Ranieri added: “Mo Salah is one of the best players in the world, if not the best. Everything he touches is a goal.”