Musician kneels on live TV to beg for release of Shatta, Medikal - MyJoyOnline.com

Musician kneels on live TV to beg for release of Shatta, Medikal 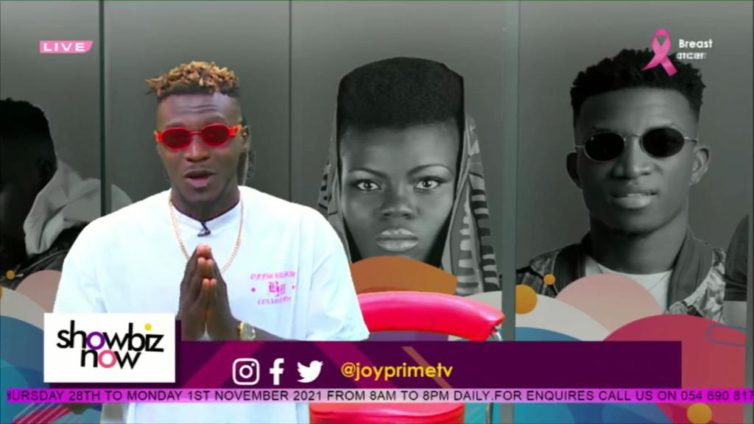 Ghanaian singer, Keche Joshua, has pleaded with the Ghana Police Service to show compassion on his colleague musicians, Shatta Wale and Medikal by facilitating their release from custody.

His passionate appeal took place when he was being interviewed on Showbiz Now on the Joy Prime channel on Friday.

The singer, known in real life as Joshua Kojo Ampah, knelt during the live television show while acknowledging that Shatta Wale is “one of the sweetest people you ever come across [in the music industry].

While admitting that the duo may have offended the law through their actions, he called on the police to temper justice with mercy.

“When it comes to the law, we need to respect the law. The law is working, they are doing their thing. To be honest, when it comes to the industry that we are in, Shatta Wale is one of the sweetest people you’d ever come across. And I know from day one that he never did this to harm anybody or bring anything.”

“The only thing we can do is to plead. We are pleading, I’m on my knees and we are begging that they should try and forgive our brothers, talking of Medikal, Shatta Wale and the rest,” he urged.

He further exhorted other musicians to measure their deeds and utterances because people treat them with dignity in the society.

“A normal person can do anything and they’d be like forget him but when you do something right now, it becomes an issue.”

“We are doing a lot when it comes to impact in people’s lives, so, we need to be careful with our utterances, our looks and everything because we are celebrities,” he noted.

Rapper Medikal has been remanded in prison custody for five days.

This was the conclusion reached by an Accra Circuit court on Friday, October 22, after the musician was arrested for brandishing a gun on social media.

His arrest on Thursday came just hours after his industry mate and friend, Shatta Wale, was remanded in police custody for one week.